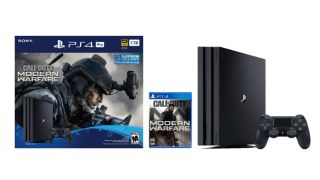 If you're looking to snap up a PS4 Pro deal in the Cyber Monday sale, you're in luck.

in the Amazon Cyber Monday deals, the Playstation 4 Pro 1TB + Marvel's Spider-Man, Horizon Zero Dawn and God of War: New Beginning console bundle has been discounted from $460 to just $300.

The PS4 Pro may not have a 4K Blu-ray player, but as a gaming console it's a solid choice. As we said in our four-star PS4 Pro review, "games have potentially more detail, making good use of the 4K and HDR updates. Menus remain smooth to navigate, and the picture when watching video is crisp and rich – in comparison to the Xbox One S, this is the better choice in many ways".

The PS5 release date may be inching ever closer, but for the next year or so the PS4 Pro will remain one of the very best consoles on the market. And at this bargain price, it's now a more appealing option than ever. So, what are you waiting for?

The best Cyber Monday US deals 2019