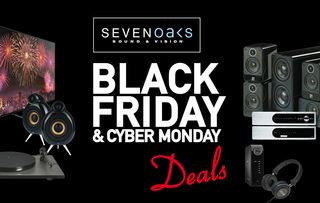 You sink to your knees, despairing. You’re battered, bloodied and bruised. Your division is scattered. It’s chaos. The battlefield is an ugly place – and just when you thought you’d been making progress on your final push, a well-organised squad outflanks you. It’s over. The last CD player is gone.

If you experienced Black Friday last year, you'll know there's no need to spend the day being stabbed by the world’s sharpest elbows in out-of-town hyper-malls. Instead, just while away a leisurely afternoon at home with a coffee and the Sevenoaks website, getting stuck in with some amazing Cyber Monday deals…

For more offers – and more home entertainment kit than you can possibly fit into your house, visit www.sevenoakssoundandvision.co.uk.