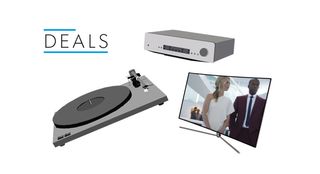 Fancy treating yourself to something shiny and new this Bank Holiday weekend? Allow us to help.

From 4K TVs to stereo speakers, soundbars to music streamers, we've found some great deals on some of our favourite products.

One of the best and most affordable 2017 4K OLED TVs on the market.

Over £140 off a pair of Award-winning over-ears? Yes please.

One listen and it's obvious why these won a What Hi-Fi? Award.

The first SoundMagic headphones to impress us, the E10s remain a solid option.

Strange name but impressive sound from a solidly-built wireless speaker.

Bargain Bluetooth speakers don't come much better than this.

A saving of 33% on Amazon's smart speaker sounds like a good deal to us.

Bluetooth speakers haven't advanced too far since the Muo won an Award back in 2015, and this is still a great speaker. Especially at this price.

This brilliant pair of speakers deliver a wonderfully inviting sound.

One of the most talented stereo amps we’ve heard at the money.

This talented turntable can rip vinyl to hi-res files, so you can digitise your record collection.

This Sony player serves up an incredibly detailed picture for the money and you can save £91 on the list price at Sevenoaks.

An Award-winning amplifier with an impressive saving. What's not to like?

One of the best ways to watch Ultra HD Blu-ray discs, you can save a bundle on this talented Panasonic player.

The brilliant Denon AVR-X3300W will take any mid-range home cinema system to the next level.

Another Award-winner from Canton. If you can accommodate this large soundbase, it will reward you well.

This Yamaha soundbar is so convincing, you could almost be forgiven for thinking you're listening to a full 5.1 system.