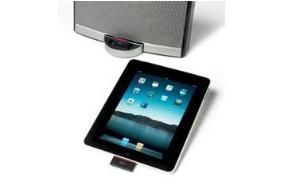 This transmitter and receiver pairing are designed to transmit music wirelessly from an iPad, iPhone or iPod to an iPod docking system – particularly handy if you have an older dock that won't fit an iPad! Airphonic will work with Bose, JBL and Altec Lansing docks, among others. See here for compatible docks.

The system consists of two small dongles, the S5T+ male transmitter, which connects to Apple devices using the standard 30-pin connector, and the female receiver version, the RX1 or RX1+, which fits in the dock.