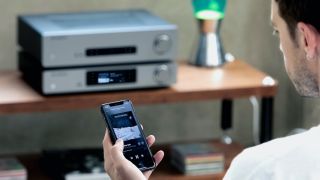 For five decades, Cambridge Audio has been designing and engineering some of the most successful audio products in the UK, in constant pursuit of its founders’ vision: to create hi-fi that delivers the ‘Great British Sound’ into people’s homes. Pure, unadulterated sound that truly represents the intention of the music artist.

Rewind to 1968, and as The Beatles were recording Hey Jude, and The Rolling Stones were gearing up to launch its seminal Beggars’ Banquet album, Cambridge Audio was swinging into the hi-fi world with the release of the P40, the world’s first integrated amplifier to use the now-industry-standard toroidal transformer.

No stranger to further ‘world firsts’, Cambridge Audio’s in-house innovations – including the award-winning StreamMagic streaming platform – have led to an impressive catalogue of respected audio products over the years, all designed to offer the best sound at the fairest price possible.

And today the company is doing anything but resting on its laurels to pursue that. In fact, the company’s CX Series 2 won big at the 2019 What Hi-Fi? Awards – the CXA61, CXA81 and CXN (V2) all picked up gongs in their respective categories.

We praised the CXA61 amplifier as “delivering a combination of sonic ability, features and build quality” that rivals struggle to match. And we had high expectations in the first place – its predecessor, the CXA60, had won multiple Product of the Year Awards. So it was a tough act to follow.

The CXA81, meanwhile, was a step on in terms of both features and performance. A bold and powerful presentation meets expert timing and dynamics to make an amplifier with class-leading levels of detail. It sets a new standard for amps at this price.

The CXN (V2) was another five-star winner for Cambridge Audio. Its superb sound quality, sophisticated design and wide range of wireless connectivity make it the best streamer at its price point, and a real display of Cambridge Audio’s seamless blend of forward-thinking technology with timeless craftsmanship and build quality.

Cambridge Audio’s in-house-designed StreamMagic streaming platform has been instrumental to double-figure Music Streamer Award wins since its inauguration in 2011 – including the What Hi-Fi? Award-winning CXN (V2) and Azur 851N streamers, no less – and the latest iteration is present and correct in the Edge NQ network player (pictured below), which What Hi-Fi? called “accomplished” and “truly fantastic” in its recent five-star review.

Multi-media moguls with a music source for each day of the week are catered for, as anything and everything can be chucked at it – it supports Chromecast built-in, Bluetooth aptX HD, Internet Radio, AirPlay, UPnP and Tidal, Qobuz and Spotify Connect, not to mention audio files all the way up to PCM 32-bit/384kHz and DSD256.

Need more proof it’s not resting on its laurels? The firm recently launched its first ever pair of true wireless headphones, the Melomania 1, marking another landmark for the company. With an incredible 45 hours of battery life at their disposal (nine from the earbuds themselves, plus an extra 36 from the accompanying carry case), they’re some of the longest-lasting wireless headphones around.

They sound fantastic too. Our five-star review concluded that they offer one of the most detailed sound performances around at their price point. The detailed, insightful audio quality is married with a reliable Bluetooth performance, making for effortless performance every time.

It’s a striking achievement, considering it’s the company’s first foray into true wireless earbuds. But given its audio pedigree, perhaps it shouldn’t come as a surprise.