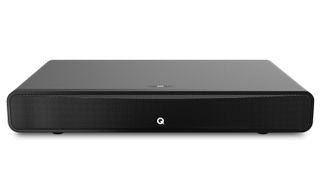 Thanks to Amazon Prime Day and Richer Sounds' Flash Deal, Q Acoustics' very highly-rated home cinema speakers have already had their prices slashed almost in half.

The soundbase and soundbar were recently reduced to £169, but thanks to an extra £20 discount they're now at their lowest prices ever at both Amazon and Richer Sounds.

Q Acoustics M2 soundbase £149 at Amazon
Q Acoustics can now add ‘soundbase’ to its list of successes. We said the M2 was fantastic value for money at its original price, so the fact it's now half price is unbelievable value.

Also available at Richer Sounds via a codeView Deal

Q Acoustics M3 soundbar £149 at Richer Sounds
Add the code 'FLASH20' at checkout to get this fantastic soundbar for just £149. There’s plenty to like about this soundbar, which is easy to use and has a clear, detailed and weighty sound.

The M2 is Q Acoustics' first soundbase (designed to sit beneath your TV), and won a What Hi-Fi? Award last year. It sounds superb, following in the footsteps of the firm's Award-winning Media 4 soundbar, and already represented fantastic value for money. So at this price, it's a steal.

The M3 soundbar (designed to sit in front of your TV or be wall-mounted) is another home cinema belter from Q Acoustics. In fact, pretty much the only reason it earned four stars instead of five in our review is because it was so similar in price to the company's own predecessor, the Media 4. But now the price has come down yet again, it's another bargain.

So how does it build on the Media 4? The M3 is a sleeker, more modern-looking soundbar, plus it has the addition of an HDMI socket. It also supports Audio Return Channel (ARC), so you can feed sound from the TV directly into it and sync up control so you need use only one remote.

If you're looking to beef up your telly's sound without a 5.1 system cluttering the lounge, either of these are a great bet.