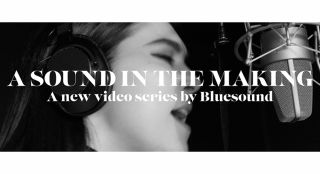 The music of Canadian jazz quartet BADBADNOTGOOD, famed for its unique collaborations with hip-hop artists like Tyler the Creator, is spectacularly sophisticated. With a broad mix of instrumentation, including the much-neglected jazz flute that’s sprinkled liberally throughout its latest album IV, BADBADNOTGOOD has a reputation for producing music that's as mentally stimulating as it is technically brilliant.

For those that value great hi-fi, such musical complexity presents a challenge - particularly when it comes to all-in-one systems. But it’s a challenge multi-room audio brand, Bluesound, has tackled head-on. In a new video series called “A Sound in the Making” - created in collaboration with Bluesound - BADBADNOTGOOD and indie contemporaries Mount Kimbie and Milk & Bone deconstruct the creative process, explaining how clever production brings their music to life and why it's so important listeners hear every instrument.

"[Cashmere was] probably the hardest song to record on the record”, explains BADBADNOTGOOD in the first episode of the series (embedded above). "Because of the nature of the instrumentation, doing it all live in the same room - which is how we always cut our rhythm section tracks at least - it's very difficult."

"It kind of just builds up from there towards the end of the song. All of the instruments that Tom Moffet and I played are kind of going at the same time, with a pretty intense melody happening with string pads underneath it. And then when it mellows out a bit more there's more flute and trumpet melodies happening in unison. [It's] probably the most hi-fi song on the record."

With the incorporation of so many complex sounds, and with so much effort going into the production process, it takes a strong system to reproduce each band's music as it was heard in the studio. That's where Bluesound comes in. Its range of all-in-one wireless speakers and stereo components - from the compact PULSE MINI to the powerful POWERNODE 2 - have been designed with the discerning music fan in mind.

"Bluesound comes from hi-fi roots and for us, it’s not just about making sound come out of a speaker," says Bluesound's June Ip. "When music is recorded, it is stored either in ones and zeros in the case of digital music files, or grooves and bumps in the case of analogue music formats. If you want those ones and zeros or grooves and bumps to sound clear, balanced and undistorted, then it matters what audio equipment you choose to decode and deliver that information to your ears."

"The technology in Bluesound decodes and delivers that musical information as accurately as possible to the listener, transporting them to the studio or to a live performance where that music was recorded. Working with bands like BADBADNOTGOOD, Mount Kimbie, and Milk & Bone, who want their audience to have that intimate connection with their music, was important in the design of these videos and the campaign."

Bluesound's Maker series sheds light onto the often misunderstood world of music production, where decisions at the recording studio change not only the sound of a record, but its emotional impact too. Decisions like what resolution the music is recorded in, the balance of the treble, midrange, and bass frequencies, and the formats it will be distributed in all have a tangible effect on the end product. The goal of a wireless hi-fi system like Bluesound is to ensure that those decisions are faithfully reproduced.

Bluesound has had plenty of success. The Bluesound PULSE 2 - a powerful wireless speaker packing individually amplified 7cm drivers and a 13cm woofer - received a coveted What Hi-Fi? five-star review. So too did its smaller cousin, the PULSE FLEX. Each has been praised for having a big, open soundstage, and solid, punchy bass. With support for Spotify, Tidal, Deezer, Napster and Qobuz, as well as high-quality aptX Bluetooth streaming, they're just as impressive when it comes to software support too.

"Often, discussions around music flow around the emotional aspects of it”, says Ip, "and by no means are we trying to undermine or question that - quite the opposite, in fact. The piece of the discussion that is often ignored or underestimated is the role that audio technologies have in bringing out that emotional connection to our favourite music every time you hit 'play' on your audio system."

Click here to find out more about Bluesound's A Sound in the Making series. Or click here to buy your very own Bluesound speaker.