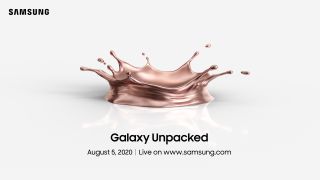 Samsung has today announced that its next Galaxy Unpacked event, where it's set to unveil the Galaxy Note 20, will take place in August – as expected.

The online event will be live streamed on Samsung's website and newsroom on 5th August at 3pm BST / 10am ET / 7am PST.

The first virtual Galaxy Unpacked event (teaser video 'invite' below) will officially introduce its next flagship Galaxy Note phones, the Galaxy Note 20 series, which naturally has been privy to plenty of leaks in the build up – including by Samsung itself.

So what are we expecting? In brief, three stylus-packing handsets: the Galaxy Note 20, Galaxy Note 20+ and Galaxy Note 20 Ultra. One of the most talked about features of the Note 20 is their screens' rumoured 120Hz refresh rate, as introduced in the Galaxy S20 series, with screen sizes for the notoriously large devices perhaps going up to 6.9 or 7 inches.

Perhaps more interestingly, one of the most historically accurate leakers on the net has tipped the Note 20 to get a revolutionary 'in-screen' camera that would 'disappear' when not in use. You can read all about the Samsung Galaxy Note 20 leaks here.

Samsung is also expected to unveil its Galaxy Fold 2 phone at the event, as well as Samsung's completely redesigned true wireless headphones, the Galaxy Buds 2/Galaxy Buds Live, which it's believed will be bundled either for free or at a discount with pre-orders of the new phones (as the Galaxy Buds+ were with Galaxy S20 series pre-orders).