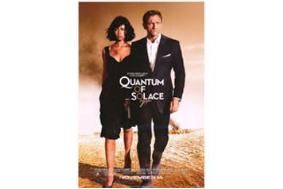 The 22nd film in the James Bond franchise features many familiar faces from 2006's Casino Royale, including Dame Judi Dench as M, Giancarlo Giannini as René Mathis and Jeffrey Wright as Felix Leiter.

Another Way to Die music video

Olga Kurylenko and the boat chase

Plus crew files and trailers

Quantum of Solace will be released by MGM and Fox Home Entertainment on March 23, 2009.