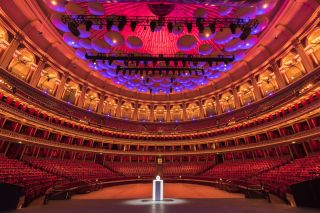 Devialet’s renowned Phantom wireless speaker recently became the 21st-century phantom of the opera when the French audio brand opened up an exclusive area in the Palais Garnier, the setting for Gaston Leroux's 1910 novel, The Phantom of the Opera.

And today, Devialet has announced a new venue partnership that will see its speaker soon occupy space in London’s Royal Albert Hall – a year after its first dealing with the iconic venue, in which the Phantom played back a lacquer pressing of jazz singer Sarah Vaughan as part of a ‘Lost Recordings’ initiative.

See all our Devialet reviews

Aiming to create a space that blends old (the venue’s heritage) and new (the modern start-up audio brand), the partnership will firstly see multiple Phantoms set up at the Hall’s door 6 entrance.

While further details regarding installations and spaces are yet to be confirmed, Mehdi Aoustin-Sellami – head of programming and corporate partnerships at the Hall – and Devialet’s UK general manager Victor D’Allancé told us it will be different (but will bear similarities) to the Palais Garnier display.

The Phantoms will likely also feature in a space dedicated to latecomers to some shows who may have to wait several minutes before they can enter the auditorium.

Aoustin-Sellami said that the Phantom experience will enhance daytime activity at the hall and benefit visitors to its restaurants, cafes and tours, as well as evening performances.

He also continued to say the project would “open up the building a lot more and focus our energies on the customer experience, making it that bit more special when people come to the hall.”

Devialet says its streaming technologies will also make it possible to broadcast Royal Albert Hall performances in real-time on Phantoms outside the Hall, giving people who are not in the auditorium the opportunity to hear live performances as they’re happening there.

D’Allancé said: “The Phantom is the only product that is able to fully transmit the exact emotion and the exact sound waves of the performance taking place. The beauty of it is that the Royal Albert Hall can export itself to many places in the UK and beyond to people of all ages and backgrounds.”

When we’ll first see or hear the benefits of this partnership is yet to be confirmed, but if it can replicate anything like the space at the Palais Garnier, which seems likely, we’re prepared to be impressed.