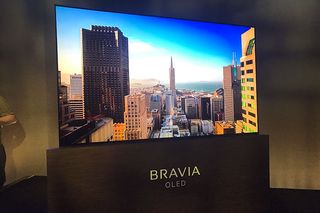 It might be freezing cold here in Blighty, but at CES in Las Vegas, the tech is red hot.

Day two of the world's biggest tech show saw announcements by Sony, Panasonic, LG, Technics and more. Read on for all the audio visual highlights.

Sony hasn't been the most innovative firm of late, so it was good to see it bring its product lines up to date on day two. Not only did Sony confirm that its first OLED TVs will ship soon, it also unveiled a new Walkman, the NW-A35. The portable music player supports hi-res audio, DSD, and lasts an impressive 45 hours on a single charge.

But Sony wasn't done there. It also announced the UBP-X800 4K Blu-ray player, alongside a Dolby Atmos soundbar and a 4K HDR ultra short throw projector. We wanted innovation, and boy did we get it.

We'd already heard about Samsung's QLED TVs (the technology it thinks will rival OLED), but we learned a little more in its press conference. Like the fact they'll start shipping in February, and will feature two stands: a rotatable Gravity stand, or an easel-inspired Studio one.

All Samsung's TVs this year will be smart models, and it teased us with a brief glimpse of a mysterious 'lifestyle' TV. The company plans to offer a more unified experience with the ability to connect its devices, and is also aiming to bring its TV Plus service to these shores soon. About time, we say.

LG is always one of the first to hold a press conference at CES, and this year was no different. Bleary-eyed journalists were treated to a flurry of announcements from the Korean giant, including the big one: more OLED TVs are on the way.

LG is one of only two firms that currently sells OLED TVs in the UK (the other being Panasonic), and it's backing the tech in a big way - no fewer than 10 new OLED sets were announced for this year, one of which is a crazy 2.57mm slim. They'll support Dolby Atmos, too, for better sound, and new types of HDR to make sure they're futureproofed. Which is a boon if you're spending thousands on a new telly.

The company even announced some new LCD TVs, for those unwilling or unable to make the leap to OLED. And it offered a glimpse into the future with Wallpaper OLED and transparent TVs. Tomorrow's World, eat your heart out.

You only turn 45 once, so you may as well do it in style. That's exactly what hi-fi brand Mark Levinson has done, by producing its very first turntable, the rather dapper No.515.

Based on a vinyl-wrapped and highly damped MDF and aluminium sandwich main chassis, supported by machined Delrin and aluminium feet with a vibration-damping polymer, the No.515 is made in conjunction with VPI Industries, which also announced its own VPI Avenger Plus turntable. No wonder vinyl sales are booming.

HiSense also talked up its ULED TV tech, which, the company claims brings improvements in colour gamut and dimming speed. We'll look into this when we get one in our test rooms.

MORE: HiSense ready to rule the world with 100in Laser TV and 4K ULED range

The EZ1002 is Panasonic's second-generation OLED TV, and promises improvements in almost every area. Panasonic also paid attention to TV sound, announcing a Technics-tuned 'Dynamic Blade Speaker' array, complete with 14 drivers and a bass radiator built into the stand. That's, quite literally, what we like to hear.

Panasonic-owned Technics announced a new model in the legendary SL1200 range of turntables: the Technics SL1200GR. It's very similar to last year's SL1200G, but costs a lot less.

Expect the usual stellar Technics build quality, a low-mass tonearm and DJ-friendly operation. Pair it with Technics new amp and speaker and you can really rock out.

JBL has taken the unusual step of making two sets of headphones for the Oculus Rift VR headset. Choose from either over-ear or in-ear models to make your experience even more immersive. Also up its sleeve were two new Bluetooth speakers and a wearable headphone that looks like a necklace.

Finally, JBL unveiled a wireless speaker set-up it hopes will rival Sonos. The SmartStream speaker series comes in three sizes, and connects to other devices via Bluetooth and wi-fi. All three models are waterproof too, which is handy for summer barbecues in the UK.