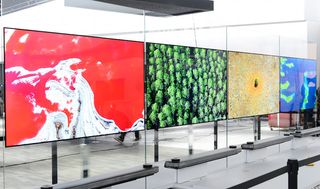 Star of the show is the 77in 'W' model with Dolby Atmos sound via a separate soundbar and support for four different types of HDR (High Dynamic Range): Dolby Vision, HDR10 and new for this year HLG and Advanced HDR by Technicolor.

Available in 65in and 77in screen sizes, the LG Signature W is so thin it can be hung on a wall using ultra-slim magnetic brackets, so it only protrudes by 4mm overall "giving the appearance of a window" (hence the 'W' in the name) according to LG. Wallpaper? Window? Either way, the LG Signature W7 TV is extremely thin.

An upward-firing soundbar that sits under the screen claims to deliver Dolby Atmos sound, and this, combined with Dolby Vision HDR compatibility, gives the new LG OLED TVs the full suite of Dolby sound and vision technology.

The sets also support the newest form of HDR, Hybrid Log Gamma, as used by the BBC on Planet Earth II for its 4K trials on iPlayer.

It's not just the flagship W series LG OLED TVs that get the full suite of Dolby Atmos and HDR tech: it's featured on all the company's 2017 OLED models. Only the W series gets its own separate soundbar, the G7 and E7 sets boast an integrated soundbar, while we've been told the B7 and C7 ranges use more speakers inside the TV chassis and advanced processing to decode Dolby Atmos.

On the W models all your sources connect to the soundbar, which has four HDMI sockets, three USB connections and one optical audio input. There's then a single cable to connect the soundbar to the screen.

Every 2017 OLED set gets the latest version of LG's smart platform, webOS 3.5, too. This means all the W7, G7, E7, C7 and B7 sets can handle HLG programming, Dolby Vision content from Netflix and HDR10 titles on Amazon Prime Video.

LG has also partnered with Technicolor to incorporate "cutting edge tech and renowned colour science expertise" into its latest OLED screens. And all the 2017 OLEDs have LG's Ultra Luminence technology to deliver 25 per cent greater brightness too.