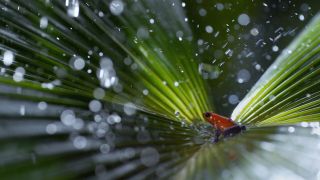 The show is the BBC's first to be shot in Ultra HD and Hybrid Log-Gamma (abbreviated to HLG and a form of HDR). The experimental footage of the show will be available via BBC iPlayer from today until early next year.

The 4K clip follows a "jaguar emerging from the shadows to stalk its prey...rain dropping on tiny animals and their habitats...and a frog in a shade of red never before seen on a TV".

The BBC said the footage would "only be available on a small selection of the latest TVs", and you can now see the full list above.

The BBC says it's "working with other manufacturers to increase the number [of supported devices]", but for this trial it's a Panasonic TV or bust.

There is one other option: Virgin TV's new V6 set-top box will be compatible with the BBC 4K/HLG footage after it gets an HDR software update early next year. But you'll still need to feed the signal into one of those Panasonic TVs to get the full benefit.

This apparently provides greater sharpness, extended detail in the shadows and dark areas of the picture, a wider range of colours and more natural and brighter highlights.

The technology was jointly developed by the BBC and the Japan Broadcasting Corporation (NHK).

HLG is compatible with existing TV technology, which makes it "ideal for broadcasters, and audiences, all over the world", according to Phil Layton, the Head of Broadcast & Connected Systems at BBC Research & Development.

The BBC also has plans to stream more Ultra HD content from its iPlayer service, following the 4K HDR tests it broadcast in the summer.

MORE: What is HDR? How can you get it?