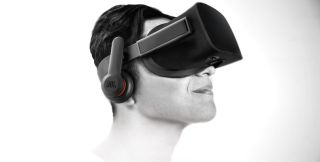 Virtual reality may be a great visual experience, but not much attention has been paid to the audio side of things. Until now.

JBL has launched two pairs of headphones designed for use with the Oculus Rift - the JBL OR300 on-ear headphones and the JBL OR100 in-ear. Both feature JBL's Pure Bass sound and both seal the ear off from surrounding noise, cutting you off from reality entirely.

The two models are compatible with the Rift's proprietary headphone connector, and are calibrated for a reliable and hassle-free connection.

The JBL OR300 and OR100 will be available in the spring for an as-yet undisclosed price.

The company has also announced a wireless wearable speaker, the JBL Soundgear, that looks very similar to the LG Tone Studio.

Worn around the neck, the Soundgear connects wirelessly via Bluetooth to your phone or tablet, which should please your fellow passengers on the bus.

The JBL Flip 4 comes in a range of bright colours, is waterproof, and promises better sound clarity than the Flip 3 as well as a 12-hour battery life. It'll be available in the spring.

The JBL Pulse 3, meanwhile, is a wireless speaker that looks like a lava lamp. The bottom is the speaker, while the top section puts on an "exhilarating light show".

It should be available in the spring, though the price is as yet unknown.