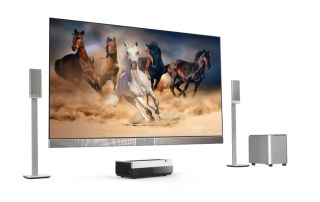 We’ve never been in any doubt about Hisense’s ambitions, and at CES 2017 the company has made its point more forcibly than ever: it intends to be the Number One TV brand on the planet.

Its willingness to call out competing brands, and to repeatedly compare itself – favourably, of course – to Samsung has, to European ears at least, the opposite effect to the one Hisense is striving for. It makes the company sound chippy, and needy, and aggressive in an unbusinesslike way – but, having said that, there can be no doubt it is deadly serious in its desire to crash the top table of the ‘Big Four’ TV companies.

And today’s Panasonic press conference, which made precisely no mention of television, must have emboldened Hisense no end.

In terms of products, Hisense is leading off with its 4K Laser Cast TV. Confusingly, this is a projector rather than a TV – we first saw it at last September’s IFA show in Berlin – but, bewildering nomenclature aside, the 4K Laser Cast TV is mightily impressive. It’s an extremely short-throw projector, capable of delivering a 100in HDR image from virtually no distance, and when it goes on sale in the USA in the second quarter of this year it’s going to cost $13,000.

That money buys not only the projector itself but a projection screen and a 5.1 audio system. The speaker system features wireless rears and wireless subwoofer, plus a front pair that can stand upright in the traditional manner or join together to form quite the largest soundbar we’ve ever seen.

Elsewhere, the company is making much of its ULED technology. ULED is, in fact, a collection of technologies (with 20 patents pending) designed to maximize the potential of LED screens. Hisense is claiming improvements in colour gamut, dimming speed, colour resolution, black levels and motion processing.

All Hisense 2017 TVs feature a redesigned Smart TV platform with a web browser and 40 pre-installed apps (including, naturally, Netflix, Amazon and YouTube).