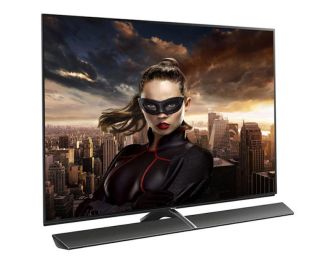 After the razzamatazz of some other product launches at CES 2017, we were left a little underwhelmed at Panasonic's event. There was a lot of talk about energy strategy, B-to-B solutions and automotive tech, and Mickey Mouse even made a brief appearance on behalf of Disney. But home entertainment was only mentioned towards the end of the presentation. Still, we did manage to did out a few nuggets so here's what to look out for from Panasonic/Technics in 2017...

It wasn't even mentioned at the official press launch, but we've been lucky enough to get a sneak peek at Panasonic's second-gen OLED TV (shown top) and from what we've seen so far it looks impressive.

The Panasonic EZ1002 is packed with all manner of picture processing wizardry, including support for HDR10 and the latest form of HDR (High Dynamic Range) known as HLG (Hybrid Log Gamma) being used by the BBC. We can't wait to get our hands on the EZ1002 when it lands in the UK.

2) ...and it's taking TV sound seriously too

It's not just about picture quality though - Panasonic has paid just as much attention to the set's sound quality with a Technics-tuned 'Dynamic Blade Speaker' array that includes 14 drivers and a bass radiator integrated into the stand.

With LG adding Dolby Atmos to all its 2017 OLED sets, it seems that TV manufacturers are at last getting serious about TV sound.

OK, we haven't been given prices yet, but with three new 4K Blu-ray players on the way from Panasonic in 2017 there will be some more affordable models in the range.

With the 2017 line-up comprising the Panasonic DMP-UB400, DMP-UB310 and DMP-UB300 consumers will have a choice of models to suit their budget.

First-gen models of any new tech tend to carry a price premium, with last year's Panasonic DMP-UB900 costing £600 at launch, but with more 4K Blu-ray players on the way from the likes of Samsung, Sony and LG prices should start to fall.

4) Technics is bringing out a better value turntable

We got very excited by the return of Technics' legendary SL-1200G direct-drive turntable last year, but at $4000/£3000 the price was prohibitive for many.

However, there's good news - it's been announced at CES 2017 that there's a new model on the way, the Technics SL-1200GR, and we're told it won't have the eye-watering price of the SL-1200G, but will retain much of the pricier model's tech highlights.

We don't know exactly what that price will be yet, but we'll be sure to let you know as soon as we do.

5) Where were all the other home entertainment products?

So far Panasonic has only shown us one new TV for 2017, and even that wasn't mentioned at the press launch. Where's the rest of its range? With LG trotting out no fewer than ten new OLED screens, Samsung making a song and dance about QLED and Sony expected to launch OLED TVs at CES this year, Panasonic didn't exactly go out of its way to wow us with new technology.

Yes, it has three new 4K Blu-ray players, but is that it? We can't help hoping it has more new kit up its sleeve to reveal later this year.