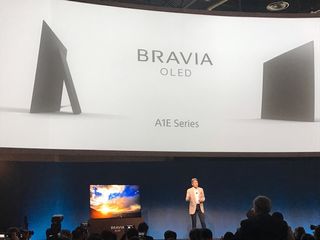 We're at the Sony press launch here at CES 2017, and the big news (as expected) is that Sony has fully embraced the world of OLED TV.

The A1 series combines an OLED panel with the X1 Extreme 4K HDR processor used in Sony's flagship ZD9 series.

Sony claims the X1 Extreme can draw out the full potential of self-emitting OLED panels, resulting in deeper blacks and brighter colours.

It also offers a form of HDR remastering so standard-definition content can be uspcaled to "near 4K HDR quality".

MORE: What is OLED? The tech, the benefits.

But there's more to the A1 series than state-of-the-art picture quality. Sound plays an important part too.

To that end, the A1 sets get Sony's Acoustic Surface technology that vibrates the display and enables the sound to be output directly from the TV screen. This eliminates the need for conventional speakers to be placed around the screen, so creating a 'speaker-less' and 'stand-less' design.

Because the sound is emitted directly from the screen, Sony says the picture and sound "become as one" for the viewer.

As for the design, it's not quite 'stand-less' like LG's new 'W' wallpaper ultra-thin OLED models, but rather has a support that props up the screen from the back, a bit like an easel.

Sony is believed to have signed a deal with LG Display for the supply of the OLED screens it needs, with a target of initially producing 100,000 OLED sets. Sony has previously made only one OLED TV, the XEL-1, though production of that model ended in 2010.

Although its 4K OLED model has grabbed the headlines, that doesn't mean Sony has forgotten about LCD TVs.

The XE94 and XE93 feature the same X1 Extreme 4K HDR processor found in the OLED A1 and current ZD9 series, while the rest are powered by the existing X1 processor.

There's even a selection of Full HD ranges (WE75, WE66, WE61, RE45) for those who don't want to splash out on a 4K telly just yet. Sony's Full HD TVs will also support HDR, something we haven't seen until now.

There's no word on pricing for any of Sony's 2017 TVs just yet, but we'll be sure to let you know once they've been announced.