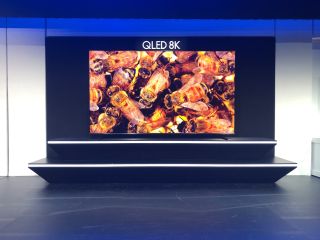 QLED is Samsung's latest generation TV technology and the central ingredient in the company's quest to improve picture performance over the coming years.

Samsung's QLED tech naturally pits itself against a near-endless procession of excellent reviews for OLED TVs. But Samsung is sticking with QLED. And the company does have its reasons, which go beyond simply not wanting to get into bed with its arch rival, and the main OLED manufacturer, LG.

So what's so good about QLED? What are the benefits and disadvantages? And how does it compare with OLED? Allow us to explain…

QLED stands for Quantum dot Light Emitting Diode and, while it currently has quite a lot in common with LED-backlit LCD TVs, it’s actually intended as the next step on from OLED.

Samsung is the only manufacturer currently selling QLED TVs, while we've seen an explosion in OLED models from a variety of rival manufacturers - although all of those use panels manufactured by LG Display.

How does QLED work?

QLED works using quantum dots, which have actually been around a little while - Samsung’s so-called SUHD TVs were using them back in 2016 - but they’ve become more of a talking point over the last year or so.

Quantum dots are tiny semiconductor particles only a few nanometers in size, and in the future they’ll be able to emit their own light. Right now, though, Samsung’s quantum dots rely on being hit by light from a backlight, much as current LCD TVs do.

The quantum dots convert the backlight’s white light into coloured light, with the resulting colour being dependent on the size of the quantum dot itself - larger ones give off light at the red end of the spectrum, smaller ones at the blue end. (Given we’re talking nanometers here, "larger" is obviously relative.)

The advantage of quantum dots in their current incarnation is significantly improved colours over LCD and, arguably, even over OLED. Certainly Samsung's 2017 QLEDs were masters of vibrancy and lusciousness and its 2018 TVs continued to impress in this regard. And while using a backlight sort-of seems like cheating, the pay off is brightness that OLED can’t get close to.

But things get really exciting when we look forward to those next-gen quantum dots emitting their own light. These photoluminescent quantum dots will give the TV the ability to light up and turn off individual pixels, just like an OLED set, while theoretically retaining the advantages of greater vibrancy and brightness.

Unfortunately, it looks as though TVs that utilise photoluminescent quantum dots are still quite a long way off. Samsung’s main focus for 2018 has been on improving the backlights of its QLEDs, and marginally increasing the luminous efficiency of its quantum dots.

Our first look at Samsung's 2019 QLED TVs revealed that while the number of backlight dimming zones remain unchanged, the company appears to have more confidence in its backlight this year.

Samsung's 2018 TV line-up included some models that use direct LED backlighting, while others use edge-lighting. There's also another Micro LED TV concept for 2019, and plans for a set with an LED backlight consisting of around 10,000 zones that can be lit individually.

The latter of those concepts will, according to Samsung, go into production at some point in the not-to-distant future. There’d be little point in launching that model if photoluminescent quantum dots were just around the corner, so we’re going to go out on a limb and say it’ll be 2020 at the very least before these next-gen QLEDs appear in shops.

What is available more immediately is Samsung's 8K Q900R QLED TV range. That's right, 8K QLED has arrived and we've already seen it in action in the 85-inch Samsung QE85Q900R and the 65-inch Samsung QE65Q900R.

How does QLED compare to OLED?

You’ll find our full OLED vs QLED feature here, but the long and the short of it is: Samsung’s QLEDs do deliver on the promise of brighter, more vibrant colours than their OLED rivals, but there are compromises too, all of which come from the reliance on a backlight.

For one, the backlight takes up extra physical space, which means that QLEDs simply can’t get as deliciously thin as OLED panels. There’s also the unavoidable fact that until each quantum dot can be lit individually, lighting a bright image in the centre of the screen is going to have an impact on the depth of blacks around it - although Samsung has made great strides against this 'blooming' with its 2018 Q9FN model.

Samsung would point to price being a factor too, although we’d argue the company’s 2017 QLEDs, while generally a bit cheaper than their OLED rivals, didn’t undercut them quite enough. It's the same with its 2018 QLEDs, which still come with a premium price tag, although prices are starting to come down. Perhaps Samsung has been as surprised by falling OLED prices as we have. We're interested to see how they compare in 2019.

Samsung also claims OLED has essentially hit its limit in terms of peak brightness, whereas we’re still in the early days of what QLED can achieve in that regard. It also says that OLEDs are prone to image burn-in - although this is not something we’ve ever seen first-hand or have received reports from our readers about, so should be taken with a pinch of salt at the very least.

It's also been claimed that QLED TVs use roughly half as much power as OLED screens, making them cheaper to run. You might not think that makes a big difference, but running a TV can be an expensive business. British Gas claimed 4K TVs are costing British homes an extra £1.8m in electricity costs because they use more power than non-4K sets. This figure is expected to rise to as much as £82m by 2019. So a more efficient TV would be most welcome.

For 2019, Samsung looks to be making iterative improvements rather than wholesale changes to its QLED panels. Our first look at a 2019 Samsung QLED came in the shape of the Q90 flagship – and we were mighty impressed. Natural, authentic colours, deep, detailed black levels and wide viewing angles left us wondering if QLED could have the beating of OLED in 2019. We will have to wait and see more 2019 TVs before we decide.

What does the future hold for QLED?

But no one is flying the flag for QLED quite like Samsung. QLED might currently seem like the product of a single TV manufacturer refusing to in any way endorse tech that’s being pioneered by its arch-rival - but it’s genuinely believed it is, in fact, the natural successor to OLED. Most manufacturers - LG included - are working under that assumption.

If you think of photoluminescent quantum dots as the end goal, what we’ve currently got is two different short-term approaches: LG is focused on the self-emissive element with its OLEDs, while Samsung is obsessed with the quantum dots themselves.

That leads us to believe Samsung will be the only manufacturer selling QLED TVs in any meaningful way until the photoluminescent quantum dot nut is cracked - which, as mentioned, is a couple of years away at the very least.

One has to suspect the likes of LG will avoid using the term ‘QLED’, which is now synonymous with Samsung, when that time comes anyway.

In the meantime, those looking for the vibrancy and punch offered by QLED have plenty of options to pick from Samsung's 2018 line-up of excellent TVs, and with 2019 QLED TVs off to an impressive start, this TV tech battle is far from over...