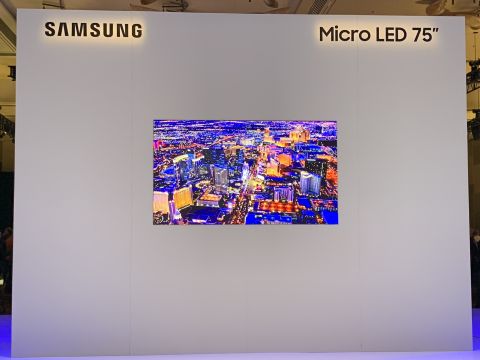 The move away from backlighting for TVs is well under way, but while most manufacturers have already succumbed to the self-emissive delights of OLED, Samsung has kept its powder dry.

Why? It reckons OLED is inherently too limited in terms of brightness and prone to degradation over time on account of its organic compounds.

Samsung's alternative is a two-pronged approach. On the one hand it's proving that there is actually life in the old backlight yet, with the company's 2018 flagship QLED, the Q9FN, doing a rather convincing job of taking the fight to its OLED rivals.

At the same time it's pursuing an alternative self-emissive tech: MicroLED.

Don't know what that is? The brief version is that in a Micro LED set, each pixel is represented by three, tiny, inorganic LEDs that shine light straight to your peepers without the need of a colour filter. The longer version can be read by clicking below.

We've actually known about Samsung's Micro LED intentions for a little while now. At last year's CES the company unveiled a 146in modular Micro LED display called The Wall, which is already available for commercial applications. This year the Wall concept expanded further with a monstrous 219in version and a number of demonstrations of configurations in peculiar shapes and sizes.

The company sees a point in the future when we have these Micro LED displays dotted all over the house: when we cover a whole wall in modules to create a floor-to-ceiling display, have a thin strip of them in the office to display interactive information, or perhaps a single module in the kitchen as a touchscreen panel for recipes and the like.

But even Samsung admits that that's a long way off, and it's keen in the meantime to convince us that Micro LED is also the next step in the evolution of the more traditional TV; hence the announcement of a more consumer-friendly, 75in Micro LED TV at this year's CES.

We've actually been lucky enough to have seen this display in the flesh twice already. Want to know what we think of it? Then read on.

One of the coolest things about Micro LED is that it's incredibly thin - thinner even than OLED, apparently. Micro LED panels don't require bezels, either.

In fact, being bezel-less is really inherent in the design, because each Micro LED TV is actually constructed using a number of small modules arranged in a grid pattern - in the case of the 75in model we've seen, there are 64 of these modules arranged in an 8x8 pattern to create a large display in a traditional 16x9 ratio.

Interestingly, on both of the occasions that we've seen the 75in Micro LED model in the flesh, it's been contained within some casework. On the first occasion it was in a simple, black, traditional TV-shaped chassis for ease of use and transportation, and when demoed at CES 2019 it very much appeared to have been mounted into a wall.

In other words, we're yet to see the final design of this core consumer model, with the focus so far having been entirely on picture quality. That said, the various other, peculiarly-shaped Micro LED configurations also shown at CES prove the bezel-less concept.

The prototype 75in Micro LED model we've seen has a 4K resolution and, while we're sure Samsung would prefer to launch with an 8K set, it doesn't sound as if that will be possible at this sort of size for a little while.

You see, a 4K set requires the use of 25 million tiny LEDs, all perfectly aligned and extremely carefully calibrated. Apparently this is extremely tricky to get right in mass production. An 8K set of the same size would require even smaller LEDs - and 100-million of them. That's a whole other manufacturing proposition.

Samsung says that its first consumer Micro LED models will hit a peak brightness of around 4000 nits - the same as the company's current Q900R range of 8K QLEDs - but that 10,000 nits will be possible before too long.

And, of course, because Micro LEDs are self-emissive and don't utilise a backlight, one pixel can be lit as brightly and/or colourfully as it likes while the one next to it is simply switched off and, therefore, perfectly black. In other words, it should provide the perfect blacks and precise contrast control of an OLED TV with vastly increased brightness (it's widely believed that OLEDs will never be able go much brighter than around 1000 nits).

Another key technical feature of Micro LEDs is their inorganic nature, which gives them a longer, more consistent lifespan than OLEDs. Samsung says its Micro LED sets will last for 100,000 hours, which is over 11 years of non-stop use. They're said to be very power-efficient, too, at least partly because they don't need to be shone through a colour filter. The light from the LEDs get straight to your eyes, so is effectively brighter with less effort.

This longevity and low power consumption is behind Samsung encouraging us to think of its Micro LEDs as more than TVs for simply watching video. The company posits that these displays can be always-on, displaying art, photos and/or live information. It also talks about them doubling up as virtual fish tanks or windows when not in 'normal' use. Think of this as an extension of the company's existing Ambient mode, and you've likely got the right idea.

This 'lifestyle' approach also extends to operation. Samsung isn't being specific at this point, but expect there to be a heavy focus on voice-control over a traditional remote. The company's already heavily pushing this agenda, with its 2019 QLED TVs getting a new, more intelligent version of its Bixby smart assistant.

Another element of the 75in Micro LED TV that apparently isn't yet settled, is how it will produce sound. Traditional TV speakers require a bezel and/or add overall thickness, both contrary to Samsung's Micro LED goals.

The company says it could go down the acoustic surface route used by Sony on its OLEDs - which uses actuators to vibrate the whole screen and generate sound - but that too would add thickness and Samsung isn't entirely convinced of the sound quality offered by such an approach.

More likely, it seems, is that discrete partnering sound systems will be offered. The approach sounds as though it could be similar to that of LG's 'Wallpaper' OLEDs, which consist of an ultra-thin display connected to a separate soundbar that also houses the inputs and processing bits and pieces. It's also possible that Samsung will offer a number of partnering sound setups, based on price or requirements, possibly leveraging the various brands that it now owns as part of its Harman business, such as Arcam, JBL and harman/kardon.

We'd also like to see the Micro LED TV offered entirely free of speakers, allowing you to add the sound solution of your choice.

As you can tell, there's still a lot about the 75in Micro LED TV that we don't know, including what it will really look like and how it will sound. That's because the entire focus of our demos so far have been on the picture quality - and that's absolutely fine with us because it's extremely impressive.

While, as mentioned above, Samsung says its consumer sets will be 4000 nits at launch, this prototype’s peak brightness is ‘only’ 1000 nits. It looks fantastically bright, though, largely thanks to that lack of a colour filter. This is a stunningly punchy and vibrant image with truly exceptional colours. Everything looks real and life-like to an extent we've genuinely not experienced before.

The demo footage we've been treated to so far contains lots of nighttime cityscapes, which look utterly fabulous on this set. Tiny but perfectly bright, white stars twinkle brilliantly against the perfectly black background of space, while the neon of the city pulses in vivid, luminous fashion. Wildlife footage is wonderful, too, with vivaciously vibrant foliage.

But if your impression now is of a sort of visual bombardment of bright whites and colours, that’s really not the case - there’s also superb subtlety to the way it reproduces the rough, grey skin of a lizard, and at no point do we feel as if we’re seeing anything other than genuine authenticity.

And, for what it's worth, the viewing angles of this prototype really do seem to be flawless. From any point in the room, the colours and blacks remain totally consistent.

The only flaw from a picture performance point of view is that on the prototypes we've seen it has been possible to make out the borders between the Micro LED modules. You do have to look very closely, though, and there's every chance this element will be refined before launch.

And, let's remember, that launch is still a long way off: We don't expect to see this consumer model in shops until 2020 at the earliest. A huge amount of refinement and development is going to be going on between now and then.

And that's hugely exciting, because Micro LED is already proving to be an exceptionally strong prospect. The performance we've seen so far is, by and large, everything we love about OLED but better - brighter, more vibrant and more efficient.

Of course, as likely the first commercially available consumer model, this 75in Micro LED TV is not going to be cheap. Samsung's predictably keeping its cards close to its chest regarding price, but our expectation is that it will cost tens of thousands of pounds at launch.

Its successors will apparently be much more affordable, though, with the company promising that prices will drop quickly as it refines the manufacturing process.

That would be very exciting, because Micro LED already looks remarkably like the future of televisions.

5 key highlights from Samsung at CES 2019

What is Micro LED? And is it actually any good?