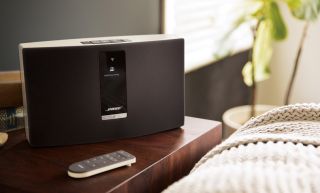 Bose has instead focused on upgrading the software, improving the set-up experience, adding more streaming music services and redesigning the control apps.

The changes should hopefully address some of our issues with the first wave of SoundTouch speakers, which you can read about in our Bose SoundTouch 20 review.

You can now get started using the smartphone/tablet app, there's no longer a need to connect your speaker to a computer, while Deezer and Spotify are now included - previously you were limited to streaming from your own music library or via AirPlay from an Apple device.

Internet radio is still on board, as is an aux input, but it doesn't look like file compatibility has been improved, so there's still no FLAC or WAV support.

The speakers can work on there own as a wireless speaker or part of a multi-room audio set-up.

Bose will hope its second-gen wireless speakers will help the company make its mark in the increasingly crowded multi-room market, with the likes of Harman-Kardon, LG, Monster and Samsung having released products to take on market-leaders Sonos.