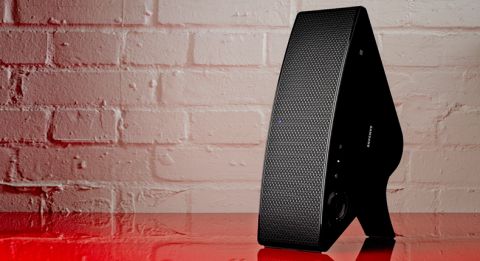 A seriously talented speaker that brings fun and performance in spades

When it comes to Samsung’s M5, there is little more you could ask a wireless speaker to do at this price.

It’s packing multi-room smarts too. And while we liked its bigger brother, the M7, there’s arguably more to love here; a better balance across the frequency range and, of course, a price tag that’s £100 cheaper.

We didn’t encounter the same issues with set-up as we did with its sibling either, using the free-to-download app to help get it onto our wireless network without much bother. Of course, you can stream using Bluetooth, but then you wouldn’t be unlocking the M5’s charm.

Once on the network, and used in conjunction with the Samsung Multi-room app, the M5 really comes into its own.

Don’t be fooled by the app’s name – you can still use it to control a single speaker; it offers you easy access to music stored both locally and on DLNA devices on the same network, plus internet radio via the TuneIn Radio service and a bevy of popular streaming services, all just a few finger taps away.

The speaker is as well-designed as the app: solid and well built. The triangular design is stylish but understated, and allows the M5 to be used flat or vertically using the stand included.

On the left-hand side, there’s an NFC point for quick Bluetooth pairing, while the volume dial is also touch-sensitive. It’s responsive, and as easy to use as a physical control.

There’s no power button, but the M5 goes into sleep mode after around 25 minutes of inactivity. As for file compatibility, it is extensive: MP3, WAV, WMA, AAC, AIFF, ALAC and FLAC (up to 16-bit/44.1kHz) music files.

The M5 is instantly enthusiastic in its handling of the soulful intro to Busta Rhymes’s Thank You, giving a surprisingly big and spacious sound.

If you want to nudge up the volume, go right ahead – the M5 will go loud before you notice any distortion, and should fill most reasonably sized rooms. It’s a lively and agile presentation, timing well and bringing superb clarity.

There’s plenty of detail, and dynamically it’s no slouch either. It steers it away from ever sounding hard or harsh too.

Some bassy recordings show up occasional tubbiness in the low end, but it’s never enough to be a problem.

You will enjoy the clean, open and exciting sound the M5 produces, while its connectivity makes it a one-stop shop for your streaming needs.

Its multi-room potential only adds to its charm too. This is a must-try wireless speaker that is fun and packs a performance.