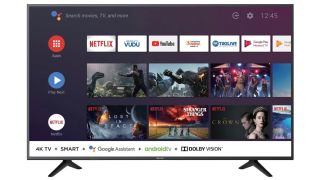 We're well accustomed to big-screen 4K TVs under $500 these days, but a 58-inch 4K TV for $300 – that's quite something. If you're looking for a large TV at a knockdown price, then, we could well have the deal for you...

These prices are often typical of discounted TVs around the 50-inch size or smaller, so to see a much larger screen go for this little money is incredibly welcome. While November's Black Friday often throws up the best TV deals of the year, we can't imagine you'll find a price much lower – if lower at all – on a TV this size during that period this year.

Hisense 58-inch 4K HDR Android Smart LED TV $300
A set this big at this price is rare indeed, and it's even more of a deal considering that 4K and HDR technologies are on board. Plus, Android TV smarts come baked in for accessing video and music apps on your set. View Deal

The TV is 4K, showing content at the highest resolution widely available, and it packs HDR 10 support to enhance the difference between the light and dark parts of the picture. Unusually for a TV at this price, it also supports Dolby Vision, a HDR format found on an increasing number of 4K Blu-ray titles and on some streaming apps.

Android TV is baked in too, offering direct access to a whole host of smart apps – Netflix, YouTube, HBO Now and Starz, to name a few – as well as built-in Google Assistant for voice control.

This fantastic deal is live now at Walmart.