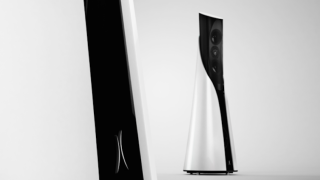 The speaker world is increasingly awash with pairs of active speakers (like the Dynaudio Xeo 2 or the Acoustic Energy AE1 Active) and, to a lesser extent, those with built-in streaming that offer a complete system (like the KEF LS50 Wireless).

The all-in-one system, which requires only a smartphone or tablet from which to operate the Estelon app, and an internet connection via wi-fi or Ethernet, utilises the Roon platform. It allows owners to play music from a NAS drive or Tidal - Estelon says more streaming service support will be announced soon.

There’s also Bluetooth for offline streaming, but no physical connections (other than the Ethernet port).

On the technical front, the LYNX is built on Estelon’s ‘Intelligent Audio’ technology, which at its core is the HQPlayer from Signalyst. That converts every file played through it to a DSD64 stream.

As DSD bitstreams allow an analogue signal to be reconstructed by low-pass filtering, the system doesn’t have to use any signal processing at the amplification stage. Speaking of which, the two tweeters, 10in woofer and pair of 5in mid/bass drivers are driven by two 260watt amplifiers.

The LYNX works wirelessly over the 2Ghz and 5Ghz networks, and a dedicated radio chipset works to align the phase and timing of the DSD clock pulses.

And, to end on a rather unusual note, the height of the speakers can also be adjusted.

Whether the Estelon LYNX can live up to its lofty price remains to be heard but, for now, we can at least commend its beautiful, very Estelon-like stature.

The best 30 speakers of What Hi-Fi?'s lifetime