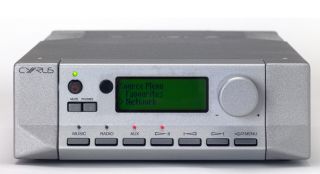 Qobuz is one of only two music streaming services (along with Tidal) offering hi-res music streams which are accessible across its web, desktop and mobile platforms, as well as from networked products with Google Chromecast or DTS Play:Fi built in.

Now its library of 70,000 24-bit tracks (available to £350 per year Sublime+ tier subscribers) can also be streamed directly from one of Cyrus’s streaming products.

Owners can return compatible products to their local dealer for the firmware upgrade, which appears on Cyrus’s Cadence app.

Until now, Cyrus’s streamers have only been able to play hi-res files from a local network or USB stick, and Qobuz has not featured on the list of directly accessible music streaming services.

This weekend, visitors to Sound & Vision: The Bristol Show will be able to talk directly to Qobuz’s Cécile Guermont. Visit Cyrus’s room at 4pm on Friday, Saturday and Sunday.

Is Spotify making it own speaker?

Apple Music vs Spotify - which is better?