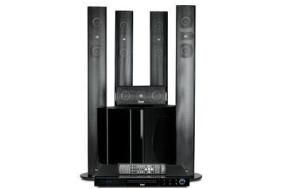 You can do better than this. Much, much better

In January 2009 we tested another Teufel all-in-one package, the Impaq 500, with favourable results: on that basis, you'd expect its Impaq 600 sibling to at least do reasonably well.

Alas, it's not to be. True, this is a satisfactorily chunky purchase, and with four floor-standing towers plus a 450w subwoofer it's able to fill larger rooms with a respectably hefty sound.

Unfortunately, that's pretty much where the good news comes to an end. Sadly for Teufel the rest is pretty much all bad, starting with the revelation that this £1150 system is DVD-only. In fairness, so was the Impaq
500 tested last year, but a year's a long time in the land of home cinema.

In 2010, this package's lack of Blu-ray support is a huge failing; several cheaper rivals play Blu-rays, gaining better picture and sound quality into the bargain. The Teufel won't access online content either, and as for 7.1 support or 3D, forget it.

Outgunned from the off
Given those handicaps, the Impaq 600 finds itself massively outgunned straight from the off. Its DVD picture, while fair in isolation, is no match for true HD imagery from Blu-ray, and even if you limit yourself to DVD playback, it's outperformed by cheaper rivals from LG, Panasonic and Samsung.

And sound? It's exciting, with overall scale that gets close to sounding like it's worth the money with louder action movie scenes, but at the same time it's tonally more aggressive than we'd like.

It's arresting, but that kind of sound can grate in time.

To say we were underwhelmed would be an understatement. At half the advertised price the Impaq 600 would still be mediocre value: at £1150, it's well out of its depth.