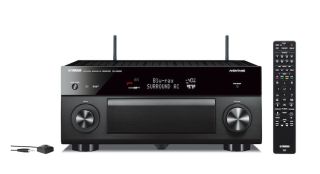 The flagship Aventage amps naturally shares functionality with the RX-V85 models, including Bluetooth, AirPlay and, for owners of an Amazon Alexa speaker, voice commands.

They also boast MusicCast streaming, opening doors to DLNA streaming of files up to 24-bit/192kHz and playback from Spotify, Tidal, Qobuz and Deezer - over 2.4GHz or 5GHz wi-fi or Ethernet. Then there’s MusicCast Surround, which lets users connect pairs of Yamaha's new MusicCast 20 (£230) or 50 (£500) wireless speakers to be handily used as rear channels.

But naturally the flagship range builds on the RX-V85's capability with enhanced features, too. For example, the RX-A1080, RX-A2080 and RX-A3080 introduce Surround:AI, which uses algorithms to automatically select the best digital processing mode depending on the type of content being played.

Like the RX-V685 (the top model in Yamaha’s RX-V85 range), the Aventage models feature a new graphic user interface that Yamaha says is simplified, faster and requires less remote button clicks to get from A to B.

As you’d expect, there’s decoding for Dolby Atmos and DTS:X. Perhaps more unusually for home cinema amplifiers, though, is a phono input for hooking up a turntable.

The A2080 has an impressive seven HDMI inputs and three HDMI outputs - as does the top of the range RX-A3080 (£2200), which also introduces XLR inputs.

It shouldn't be a deal breaker for most and given Yamaha's track record over the years we still can't wait to get them into our test rooms.

The new Aventage models will start appearing on UK shelves in July.