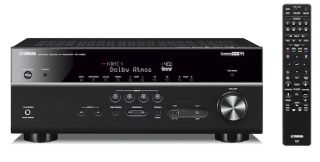 Wi-fi and Yamaha’s MusicCast network streaming platform allows streaming from services such as Spotify, Tidal, Qobuz and Deezer. It can also play PCM files up to 24-bit/192kHz over DLNA, and has multi-room functionality.

Bluetooth, AirPlay and FM/AM radio tuners are also onboard, and owners of an Amazon Alexa speaker (such as the Echo, Echo Plus or Echo Spot) can control the amps’ volume or music playback simply by using their voice.

eARC (Enhanced Audio Return Channel), which allows your TV to directly pass DTS:X and Dolby Atmos soundtracks to your audio system, will also be available via a future update.

The 80W-per-channel RX-V585 has four HDMI inputs and a second subwoofer output, while the RX-V685 has a fifth HDMI input, a second HDMI output for running a second TV or projector, and a phono input for hooking up a turntable.

The RX-V685 also benefits from a new user interface with simplified operation menus and faster navigation. It also comes with a new, slimline remote.

Last but not least is a slimline model, the RX-S602 (above), priced £599, which replaces the RX-S601 being discontinued in May. Like its predecessor, the RX-S602 is a 5.1-channel network receiver, but has MusicCast, as well as Bluetooth and DAB/DAB+ radio tuners. It also features Alexa voice control and Cinema DSP 3D processing, and can be used with Yamaha’s wireless speakers as surround channels.

Details of the brand’s top-end Aventage range are so far under wraps, but we hope to be able to bring you more information soon.

4 of the best home cinema amplifiers