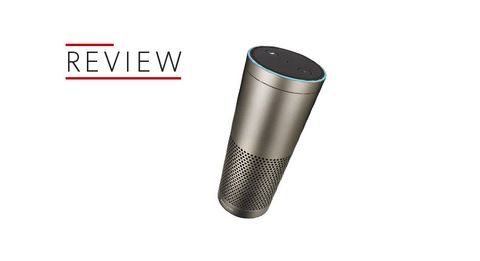 What sort of speaker comes with a lightbulb? The Echo Plus does. The most feature-laden of Amazon’s array of smart-speakers, the Echo Plus carves its niche by not only being a speaker, but by having a built-in smart home hub too.

In the same way your router connects your smartphones and tablets, this hub links devices like smart-lightbulbs or thermostats to the internet, using a specialised mesh network.

And to get you started on the path of internet-connected fridges, washing machines and coffee-makers, at the time of writing, if you buy the Echo Plus via Amazon, you get a free Philips Hue light.

But is this really a, ahem... bright idea? On the whole, it is. The Echo Plus is certainly as capable an Alexa speaker as we’ve come to expect, and smart-home control is an appreciated addition as well.

The Echo Plus isn’t giving away its smarts in its appearance, though, and looks almost identical to the Amazon Echo from 2016. It has a black, white or chrome coloured plastic housing, compared to the material finish on the new, smaller Echo.

The Echo Plus has the familiar ring around the top that both denotes volume, and the same blue light that reacts when you call out “Alexa”.

The one major change between the new and old Echos is the 3.5mm output on the back of the Plus. This means you can plug it into more expansive audio systems and have Alexa controlling your existing speaker set-up.

The Echo Plus comes with the Alexa smart assistant built-in, which allows you to set alarms, make lists, text your friends and perform a multitude of other ‘skills’ (Amazon’s equivalent of apps) – all controlled by your voice.

With the release of the Echo Plus and the new Echo, Amazon has increased the capabilities of Alexa with ‘drop in’, which lets you make quick phone calls to the people in your contact list with other Echo devices, or to the Echos in your house.

Think of it as FaceTime or Skype, but built by Amazon instead.

There are also ‘Routines’, which let you program and control multiple Alexa devices with a single command. Saying “Alexa, go to sleep” could turn off your smartlights and boil your kettle for a bedtime cocoa, for example.

Supported brands include Philips Hue, TP Link and Wemo, but the usefulness of this feature will depend on how deep into Amazon’s connected ecosystem you’re willing to go.

And while you can switch off the lights and boil the kettle, unfortunately the Echo Plus is yet to include support for music streaming or control of Fire TVs.

The Echo Plus’s built-in hub allows you to detect internet-of-things devices through a voice command (“Alexa, discover my devices”). This is smoother than setting up via an app or an external hub, but it does come with some compromises.

For example, the Echo Plus can turn on and off Philips’ lights, but won’t let you adjust the colour. For this, you need the Philips Hue app and also the Hue Bridge hub – an external smart hub that connects to your network and acts as a dedicated controller for Philips’ smart lightbulbs.

All this rather defeats the point of having a hub built into your speaker.

The Echo Plus’s hub also works only with devices that use Zigbee – a type of wireless protocol that certain smart devices use.

However, with more than one internet-of-things protocol out there, devices that use the Z-Wave protocol (for example) won’t be able to communicate with the Echo Plus.

For most users, this difference won’t be an issue, as some products from major manufacturers support both protocols, but it is something to consider.

Give the command to start playing, and there’s no doubt the Echo Plus is certainly the best sounding Amazon Echo yet. If you have your heart set on an Amazon-branded Alexa speaker, this is the one.

You can link it with Amazon Music, Spotify or stream music wirelessly to it as you would any other Bluetooth speaker. On the whole, it’s a sufficiently pleasant listen from its 20mm tweeter and a 63mm woofer.

Amazon says it has improved the sound quality of its speakers through on-board ‘Dolby processing’, and comparing it to the original Echo we can hear the difference.

We play Shelter by The xx, and Romy Madley Croft’s voice sounds more robust from the Echo Plus than its previous iteration, and there’s greater clarity to her ethereal, breathy lyrics.

Fast-forwarding a few tracks to Infinity – a song that Croft recorded with Oliver Sim at opposite ends of the studio – the Echo Plus renders that space and the feeling of distance well.

And it has a good sense of rhythm, as we get the toe-tapping Superstition by Stevie Wonder playing through it via Spotify Connect.

It tracks the twanging, rapid licks of the electric guitar competently and with much more vibrancy than its little sibling, the new £90 Echo 2. The funkiness to the drums is retained well.

Dynamically, it’s fairly adept – the differences in the intensity of the strings during Mozart’s Piano Concerto No. 21 in C Major (played by Howard Shelley) come through and fall away with enough force to keep you entertained.

But compared to the Sonos One, which also has Alexa built-in, the Echo Plus struggles. The One races ahead across the board, with a more sophisticated sound and a superior handling of dynamics, bass weight and a potent midrange.

Those wanting a smart-assistant with great sound should consider spending £60 more for the One. Provided you are happy to sacrifice the Echo Plus’s smart home capabilities, you get so much more for your money.

But as a jack-of-all-trades entry into the world of internet-connected devices, the Echo Plus is an admirable product.

You can dip your toe in the waters of an automated household without spending large amounts of money, while getting all the benefits of Amazon’s smart-assistant too.

Just don’t expect it to have quite the same sonic capabilities as similarly-priced dedicated speakers.