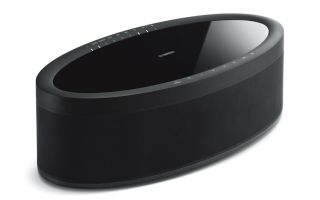 Not content with announcing four midrange AV amplifiers, Yamaha has also revealed several other new products across its portfolio.

There are two wireless speakers: the MusicCast 20 (£230) and MusicCast 50 (£500, above). Both speakers are based on Yamaha’s MusicCast streaming platform, meaning owners will have direct access to services such as Spotify, Tidal, Qobuz and Deezer. It can playback hi-res files up to 24-bit/192kHz over DLNA.

The platform also enables multi-room, allowing more than one speaker to connect to each other, either in separate rooms or as a stereo pair. Thanks to a feature called ‘MusicCast Surround’, each speaker can wirelessly connect to one of its new MusicCast AV amplifiers and act as rear surround channels in a home cinema set-up.

They also feature Bluetooth and AirPlay and, in addition to built-in wi-fi, there is an ethernet socket for a more stable connection. Both speakers also have an alarm clock.

Owners of an Amazon Echo speaker, Fire TV or Echo Show can control music playback, and other basic functions, by using voice commands. For example, you can change volume or “ask MusicCast” to play favourites or playlists, or group speakers together.

Commands for specific artists and songs are on the ‘coming soon’ list – as is support for Google Assistant.

The MusicCast 20 and MusicCast 50 have a new MusicCast chipset. Two wi-fi antennaes, with 5GHz joining 2.4GHz, should mean a less congested connection. 'Link’ allows up to 32 devices to be connected per location, meaning you can connect 20 speakers via ethernet cable or ten over wi-fi. Yamaha also claims to have shortened the delay when linking speakers together.

While the MusicCast 20 is a 40W speaker without physical connections, the larger MusicCast 50 outputs 70W per channel, has a reflex instead of a passive radiator, and has optical, 3.5mm and RCA inputs.

The new MusicCast speakers, which will replace the existing WX-010 and WX-030 models, will be available in September, in a choice of black or white finishes.

The MusicCast Bar 40 (£500, above) and MusicCast Bar 400 (£600) soundbars sit beneath the company’s existing YSP-2700 and YSP-5600 models, and will replace the YSP-1600. Instead of YSP (Yamaha Sound Projection) technology, the new soundbars use DTS:X Virtual processing to virtually create the effect of a 7.1.4 surround set-up.

It’s a technology that has already proved its worth in the company’s Award-winning (non-MusicCast) YAS-207 soundbar, so we look forward to experiencing it alongside the new soundbars’ MusicCast features.

In addition to wi-fi and full MusicCast network streaming, there is Bluetooth, AirPlay, single HDMI, 3.5mm and optical inputs, and a HDMI output. The 40 also has a subwoofer output, while the 400 comes with a separate wireless subwoofer.

Like the AV amplifiers, the soundbars can connect wirelessly to the MusicCast 20 and MusicCast 50 speakers and can be used as rear speakers in a surround set-up.

Yamaha has even included MusicCast in a subwoofer. The MusicCast Sub 100 (£500) completes the new line-up, and can be used in a MusicCast Surround or multi-room set-up.

It sports a 20cm driver, 130W of power and can connect to a MusicCast soundbar or AV amplifier either wirelessly or via its 3.5mm jack.