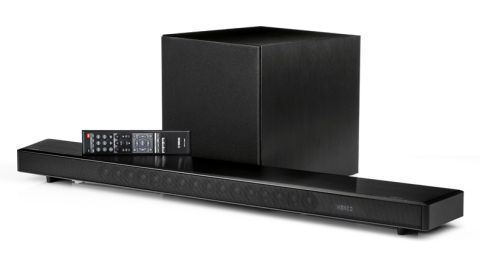 The most convincing surround sound experience you'll get outside a full 5.1 system

Not everyone can accommodate a traditional full surround-sound system and in many cases, convenience always wins out. Lack of space, too many wires, too much hassle - any of these sound familiar?

Step forward Yamaha’s YSP soundbar range. It's been one of the best solutions for over a decade now, offering a simpler, more compact way to get a form of surround-sound into your home.

And we think the Yamaha YSP-2700 could be its best iteration yet.

It works by using 16 2.8cm array drivers, each driven by 2W of amplification, to beam sound around your room, bouncing it off the surrounding walls to create a 7.1ch effect – up from the Yamaha YSP-2500’s 5.1ch capabilities.

The grunt of the set-up is handled by the new cube-shaped front-firing wireless subwoofer, which works with the bar to create a total power output of 107W, and can be placed anywhere in your room.

The soundbar should be placed centrally, but thanks to the Intellibeam calibration technology, which tests your room’s acoustics and changes settings accordingly, it works with corner set-ups too.

The procedure takes no more than a few minutes, and once it’s completed, you’re ready to go.

How to choose the right soundbar

There are two main modes on the YSP-2700 soundbar – surround and stereo. Select the former for anything movie-based and the latter for music listening, with both tuned by Yamaha specifically for a UK audience.

There are also a number of DSP modes labelled up for movies, music and entertainment, but it adds unnatural effects to the performance that are at best distracting, and at worst, off-putting.

The YSP-2700 certainly delivers when it comes to connectivity, with three HDMI ins and a single out, plus one each of optical, coaxial and analogue audio.

All HDMIs support HDCP 2.2 and 4K/60p video, plus they are able to decode HD audio formats like Dolby Digital TrueHD and DTS:HD.

For that reason, we recommend using the soundbar to do the HDMI switching instead of your telly – as long as it has enough inputs for you of course.

As for wireless connectivity, this Yamaha soundbar is a MusicCast device, which automatically makes it part of a multi-room system with any other Yamaha kit, plus it supports streaming over Wi-Fi (up to 24-bit/192kHz), Bluetooth, and Apple Airplay.

It can even transmit via Bluetooth to a pair of wireless headphones or a speaker.

Put on a movie and this Yamaha soundbar immediately demonstrates just how wide it’s capable of throwing the sound.

It’s not quite as convincing with pushing sound behind us, but anything else is placed with superb space and precision in a way you rarely get with other soundbars.

During a shootout with the Butcher’s henchmen in American Sniper, gunshots and explosions are delivered with good weight and a hefty amount of punch, whizzing from left to right and overhead with an enveloping sense of accuracy and agility.

It’s a well-balanced sound, with low-end wallop controlled and light-footed enough that it doesn’t impress itself too heavily upon the rest of the frequency range.

It gives more substance to the midrange, which is focused and decently detailed. Voices have no hard edges and the sound has a touch more authority.

The slight clipping of the treble means there’s not as much expression in dialogue as with the Dali Kubik One, for example, and the top-end zing in gunfire doesn’t have the same bite either.

Dynamically it works well with sound effects and soundtracks to ramp up tension. It articulates the differences between loud and soft with ease, jumping into action but equally capable of scaling right back too.

The YSP-2700 makes a good case as a decent music system too, with its balanced sound working as well with lossless music as it does lower-res Spotify streams.

It times well, keeping itself coherent and organised during more complicated pieces of music. Play an upbeat track like Flume’s Smoke and Retribution and there’s enough drive to keep your toes tapping.

Opt for a more considered acoustic track, like John Martyn’s Head and Hearts, and you’ll hear the subtleties of every guitar strum.

The Dali does pip it for musical capabilities though, delivering more detail, nuance and insight, which ultimately makes for a more upfront and engaging performance.

That’s a fair reflection of their characters with movies too, but then the Dali can’t boast such a wide, precise soundstage, such a wealth of connectivity options or such an accommodating design – you’ll need a whole shelf on your rack to house the Dali.

That wide soundstage in particular is certainly not something to be sniffed at.

It isn’t as explicit an effect as a full surround-sound system will deliver, of course, but the placement of sound in areas that other soundbars simply can’t reach makes for a more involving soundbar experience than any other we’ve heard.

There’s no doubt its price tag will mean the YSP-2700 sits at the top end of most budgets, but its excellent performance and unique capabilities more than justifies it.