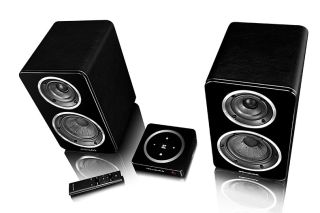 Wharfedale isn’t the first company to produce a pair of wireless powered speakers, but the majority require a cable to connect an active speaker to its passive sibling.

Instead, the company's Diamond Active speakers use a hub, the H1, to wirelessly send left and right channel signals to the respective speaker, meaning they aren’t tied together and can be placed anywhere in a room.

Each speaker in both the A1 and A2 pairs has its own 50W amplifier, which Wharfedale says provides “consistent, fully optimised stereo sound".

The H1 hub operates on the 5.8GHz frequency band and switches between frequencies within that band, as and when required, to help maintain a stable connection to the speakers. The only constraint is that you’ll have to keep them within a 20m range of the hub and near a power socket, as both need to connect to the mains.

The Hub also hosts a decent selection of inputs: digital optical and coaxial and two RCA-phono inputs for analogue sources, as well as aptX Bluetooth. It also has a few intuitive features, such as bass adjustment and a mono mode, which allows the speakers to be placed in different rooms - a basic multi-room system of sorts.

Both the A1 and A2 use a proprietary mid/bass driver with a woven Kevlar cone, the A1 gets a 13cm version while the larger A2 gets two measuring 16.5cm each. A 25mm fabric dome tweeter derived from the Diamond 200 series can be found on both models.

The Diamond Actives also get a specifically optimised crossover network, which Wharfedale says results in a “cohesive performance that is bold and engaging, yet also impressively refined”.

If you’ve seen a pair of speakers from the Diamond 200 series, then you’ll notice the design similarities carried across to the Actives, such as silver-coloured driver surrounds, but the Actives do get new rounded cabinet edges.

Both the Wharfedale A1 and A2 come in black 'leatherette' finish, with either gloss black or gloss white front baffles. The A1 and A2 will be available from October, priced £600 and £1000 per pair respectively, including the H1 wireless hub.