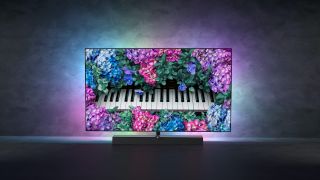 Philips has taken the wraps off its top TV for 2020, the OLED+935, and perhaps the biggest news is that it will be available as a 48-inch model.

The 48OLED935 will join the usual 55-inch (55OLED935) and 65-inch (65OLED935) versions, and will be the first Philips OLED to be available at such a compact size. When released, it will go up against the likes of the LG OLED48CX and Sony KD-48A8, with all models using the same LG-sourced panel.

The availability of a Philips OLED at 48 inches is great news, but the OLED+935 is also exciting in that it offers a number of upgrades over the already excellent OLED805.

The most obvious upgrade is to the sound, with the OLED+ 935 gaining an integrated soundbar designed by British hi-fi brand B&W. This is a continuation of a very fruitful partnership that has seen the creation of models such as the 65OLED984, which we described as having "comfortably the most musical audio performance of any TV we’ve tested... with detail and dynamics hitherto unheard from a TV sound system".

The OLED+935 is unlikely to hit quite the same sonic heights with its significantly more compact soundbar but it does, in fact, boast more power (70W compared to the OLED+984's 60W) and two dedicated upward-firing drivers (as well as B&W's appealing tweeter-on-top arrangement). That results in a Dolby Atmos-friendly 3.1.2 configuration that could actually prove better for movie sound. Either way, it should offer a big upgrade on the OLED805.

The OLED+935 also sees the introduction of the anti burn-in tech that the company teased at an event in February. This is said to solve 95 per cent of OLED burn-in issues by scanning the image for static elements such as logos, the brightness of which it then reduces. We felt that this looked a little unsubtle when first demonstrated, but the tech was very fresh at the time and could have come a long way since. We can certainly see the appeal of any tech that promises to extend the life of an OLED panel.

Last but by no means least, the OLED935 also gains a fourth side of Ambilight LEDs along its bottom edge. For those still unfamiliar with Ambilight; it's a technology that extends the onscreen action on to the wall around the TV in the form of coloured light. It's utterly spectacular and actually has benefits to picture quality by increasing perceived contrast and making the screen seem bigger than it really is. Adding this fourth side makes a fairly significant difference if you're wall-mounting the TV.

On the negative side, it seems that Philips has chosen not to upgrade the HDMIs for this new model, so the only HDMI 2.1 feature that the OLED935 has is ALLM (Auto Low Latency Mode). That means there's no support for eARC (Enhanced Audio Return Channel), VRR (Variable Refresh Rate) or HFR (High Frame Rate, also often referred to as 4K@120Hz).

The 55-inch and 65-inch versions of the OLED+935 will be available later this month (September), with the 48-inch model following in October in the UK (Australian availability yet to be confirmed). Pricing is as follows: