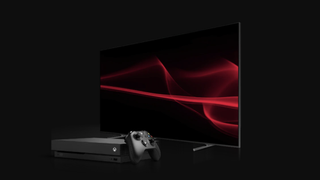 HDMI 2.1 is a big deal in lots of ways, but it’s especially important for gamers, particularly as we approach the PS5 and Xbox Series X generation.

That’s because HDMI 2.1 introduces support for a number of gaming-specific features, such as ALLM (Auto Low Latency Mode), which automatically switches your TV to its low-lag gaming preset when a signal from a console is detected. HFR (High Frame Rate), meanwhile, opens the door to games running at over 60 frames per second.

But, arguably the most important spec of the bunch, and the one that you can take advantage of right now, is VRR. So what is it? And how do you get it? Spoiler alert: you don’t necessarily need an HDMI 2.1 TV, and the console you’ve already got might do it.

VRR stands for Variable Refresh Rate and, simply put, it allows a TV to adjust its refresh rate in real-time to the frame rate output by a games console or PC.

You see, while a film or TV show runs at a consistent frame rate (generally 24fps for films and 24fps or 50/60fps for TV shows), the frame rate of a game constantly changes depending on the amount of processing going on: a less busy part of a game might run at a relatively consistent frame rate of, say, 50fps (although in reality this number will almost always fluctuate a bit), but a sudden explosion could see the console have to suddenly work much harder and the frame rate drop to 30fps or even lower. These constant and sudden changes in frame rate can cause stutter and tearing on displays that run at static refresh rates - which is pretty much all of them.

That’s where VRR comes in. A TV that supports VRR will dynamically match its refresh rate to the frame rate of the game, keeping pace with all of these changes. The result is smoother, more consistent gameplay.

Unfortunately, there isn’t just one format of Variable Refresh Rate. VRR began life in the PC gaming domain, where two graphics card manufacturers - AMD and Nvidia - are locked in an eternal battle for supremacy, and each one has its own VRR format: AMD’s is called FreeSync and Nvidia’s is G-Sync.

If you’re a PC user, the VRR format you can use will depend on which of the two companies manufactured your graphics card.

It's widely believed that a TV needs to support either Freesync or G-Sync in order to support VRR from game consoles, but this isn't actually the case. That's because there's a little talked about third VRR format, called HDMI Forum VRR, or even just HDMI VRR.

This VRR format is part of the HDMI 2.1 spec and is starting to appear on a fair few TVs, even some that officially have only HDMI 2.0 sockets. It's also worth noting that a TV that supports HDMI 2.1 won't definitely support HDMI VRR, although it is likely.

Of the current-gen consoles, only the Xbox One X and Xbox One S support VRR. VRR is not supported on any version of the PS4 - not even the PS4 Pro.

The Xbox One X and One S primarily use the FreeSync format, but they also support HDMI VRR. If your TV supports FreeSync, that's what the console will send it, if it doesn't but does support HDMI VRR, it will send it that instead. That's why some people who have TVs that aren't on the FreeSync compatibility list are still able to activate VRR on their Xbox.

Both current versions of the Xbox support VRR in a window of 40Hz to 60Hz, but things get really interesting when we look forward to the Xbox Series X. Microsoft's next-gen console supports HDMI 2.1 and will handle VRR in 4K from as low as 30Hz right up to 120Hz - as long as your TV can do the same. Again Xbox Series X will support both FreeSync and HDMI VRR.

Things are a little less clear with the PS5. When looking at the ‘Video Out’ portion of the official specs, we notice that it states “VRR (specified by HDMI ver.2.1)”. We're taking that to mean that it will support the generic HDMI VRR format, but FreeSync might be offered as well - the PS5's graphics chip is manufactured by AMD after all.

We understand there are some exceptions (Vizio’s V-Series, for example) but, broadly speaking, if your TV has HDMI 2.1 sockets, it should support VRR. The problem is that there still aren't many HDMI 2.1 TVs out there. The good news, though, is that some HDMI 2.1 features, including VRR, are being added to the HDMI 2.0 sockets of some TVs.

To cut a long story short, the two best TV brands for VRR support are LG and Samsung.

LG's OLEDs have been HDMI 2.1-certified for a couple of years now, so owners of 2019's B9, C9, E9 and W9, as well as the company's premium LCD sets such as the SM9800, can all make use of VRR up to 60Hz. This year's GX, CX and BX up the ante by supporting VRR in 4K at up to 120Hz, which makes them excellently placed for the next-gen consoles. G-Sync and HDMI VRR are supported out of the box, but official FreeSync support is also promised for 2020 models via an upcoming software update.

Samsung's top TVs generally aren't officially HDMI 2.1-certified but have offered VRR support for a while now. All of the company's 2018 QLEDs, from the flagship Q9FN right down to the Q6FN, support VRR up to 60Hz via the FreeSync and HDMI VRR formats. The same is true of 2019 QLEDs from the Q60R upwards, as well as the excellent RU8000 LCD model.

In terms of 2020 Samsung models, you need to buy at least the Q70T in order to get VRR - the Q60T and TU8000 rather disappointingly don't support it. Those 4K models that do support VRR (the Q70T, Q80T, Q90T and Q95T) also appear to max out at 60Hz, which isn't a problem now but might become one if you upgrade to Xbox Series X or PS5. We've asked Samsung to comment and will report back.

With other manufacturers, support is patchy at best. Sony's only TV that supports VRR is the new XH90 (also available as the XH92 at certain retailers), and Panasonic and Philips currently produce no TVs with VRR on board.

If you're a gamer keen to have VRR support - and we think that you should be, particularly if you plan to buy a next-gen console - it's well worth checking to be sure your next TV has got it. And remember; even having HDMI 2.1 sockets is not a cast iron guarantee of VRR support, so do tread carefully.

Of course, our TV reviews highlight those models that do support VRR, and we also produce a list of the best gaming TVs you can buy.

PS5: everything you need to know

Xbox Series X: everything you need to know