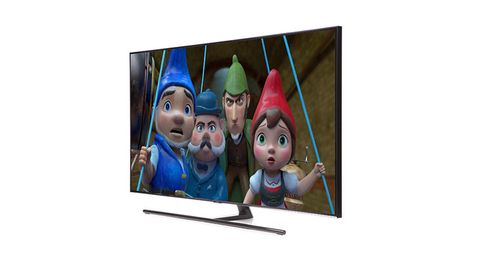 It is often presumed an excellent TV at one size will continue to be an excellent TV when scaled up or down. However, there are lots of reasons why that might not be the case.

Even if the features and processing bits and pieces are the same (and that’s not a given, particularly at smaller sizes) the panel itself will be different.

And that’s before you get into the thorny issue of whether the smaller or bigger set has a different selection of rivals and is a greater or lesser value proposition.

This might explain why we can’t simply skip the reviewing process and slap a five-star rating on the Samsung QE55Q9FN, despite its 65in sibling proving an absolute belter when we reviewed it last month.

But had we cut corners on this occasion, we would nevertheless have been spot-on – the 55in Q9FN is very much a chip off the old block.

The biggest upgrade for the Q9FN over its QLED predecessors and siblings is the move from edge backlighting to a direct, full-array backlight.

This has resulted in not only far greater brightness (around 2000 nits) but also, thanks to precise zonal control, genuinely stunning contrast.

The number of individually dimmable zones to the Q9FN’s backlight has not been confirmed by Samsung, but is thought to be in the region of 500.

Considering that a 4K OLED can be lit or dimmed on a per-pixel basis, effectively giving it 8,294,400 ‘zones’, the Samsung’s 500 probably sounds rather ineffective. In action, though, the opposite is true.

We play Guardians Of The Galaxy Vol.2 on 4K Blu-ray and the image is incredibly bright and punchy. The way the brightest elements combine with deep, inky blacks is impressive, and an exciting development for Samsung QLED TVs.

There’s essentially no discernible bleeding or blooming of the backlight, and no raising or lowering of the overall black level. This is the very best type of backlight: one you simply don’t notice.

That leaves you free to focus on the gorgeous image. The view of the Sovereign planets from space, for example, in which you can see more stars than most sets are aware of on an almost pure black background. Almost OLED-black, in fact.

Guardians is one of our current testing favourites, and the Q9FN offers one of the best versions of it we’ve seen.

The super-bright stars against super-dark space, the punch and vibrancy of the exotically coloured nebulae, and the rich, metallic shimmer of the golden portions of the main planet – few TVs can recreate the shine of reflective materials the way this one can.

But don’t go thinking the Q9FN is a blunt instrument. It combines that startling punch and vibrancy with serious subtlety. Though the palette generally leans towards the rich side of neutral, the nuance of its shading makes it just as capable with more realistic, less sci-fi fare.

Play Baby Driver in 4K HDR and the skin tones are warm but natural. There is oodles of detail here too, particularly in the brightest and darkest parts of the picture, and the razor sharp – but not artificially enhanced – edges deliver a sense of solidity and three-dimensionality that makes characters and cars pop from the screen.

Samsung should also be applauded for taking a big step forward in terms of motion processing. The Auto mode is still too aggressive and unnatural, but the Custom mode, even with its default settings, does a good job of tightening motion up without introducing artefacts or the soap opera effect.

Compared to current Sony sets there’s still more blur, but this is an improvement on last year’s Samsungs and, to a lesser extent, the LG OLED55C8PLA.

We take a step down to the 1080p Blu-ray of The Imitation Game and the Q9FN continues to deliver. Detail levels are particularly impressive, revealing all the notches and scratches of the interview room’s well-worn desk at the start of the film and the individual bricks of the dim wall behind.

There is real depth and solidity to proceedings. Rory Kinnear’s Detective Nock stands out against the rain-soaked Manchester street of Turing’s recently burgled abode, the leather band of his battered fedora reflecting the little sunlight of the overcast sky. There’s texture and life here, and it’s a long way from the overblown image you may expect given all the talk of brightness and vibrancy.

Drop down to standard-def from DVD or the onboard tuner, and the Samsung does a good job with the low-quality signal.

It falls just short of the near-magical upscaling qualities of LG’s OLEDs, proving a little noisier around edges and in finer details, but the clarity and cleanliness of the image is still impressive when you consider how much of it is essentially being made up by the TV.

This is an excellent TV for gamers, too. Not only is its punch, vibrancy and contrast brilliantly suited to computer graphics, particularly those of modern HDR games, its input lag of under 16ms is essentially as fast as TVs currently get.

The HDMI inputs also support Variable Frame Rate (VFR), which means the TV can adapt its refresh rate in real time to be in sync with the frame rate of the incoming signal and therefore reduce unsightly ‘screen tear’. Previously only available on dedicated gaming monitors, it could make the Q9FN the ultimate gamer’s TV.

Our only concern with the Q9FN is its viewing angles. Samsung has made a lot of progress over last year’s QLEDs but, unlike sitting at an angle to a current OLED TV, sitting off-centre here gives a slightly sub-optimal picture.

In some ways just as exciting as the new backlight are the changes Samsung has made to the OneConnect box. This is where Samsung houses the connections for its TVs, leaving the screens to be thinner and less cluttered.

The OneConnect box on this year’s QLEDs is twice the size of last year’s, but that’s because, as well as housing the inputs and outputs, it also passes the power to the panel. The cable connecting the two is thicker than last year’s, but still easy to hide. If the 5m length of the bundled cable isn’t long enough, a 15m version can be purchased separately.

The OneConnect approach is definitely a boon for wall-mounters, who might also find the Ambient mode intriguing. It’s designed for those who find the black, blank screen of a TV on standby aesthetically unsatisfying, and allows you to display your own photos on low brightness, with live information such as a clock, calendar or news feed.

If the TV is mounted on a patterned wall, you can even replicate the pattern so it blends in. It’s impressive tech and a unique solution, if you happen to think a blank screen a problem.

Those interested in smart home tech might be intrigued to hear the Q9FN, like its siblings in the 2018 QLED range, is integrated into Samsung’s Smart Things ecosystem.

This means it can wield basic control over other compatible devices, such as Samsung fridges and robot vacuum cleaners, and third party products such as Hue lightbulbs.

However, the control offered via the TV is basic, to the extent you’re probably better off using your phone.

Amazon Video even supports Samsung’s own HDR10+ format, which uses dynamic metadata to enhance the contrast and colours of specific TV shows. It’s beneficial in the same way as Dolby Vision (which Samsung doesn’t support), but the fact that none of the relevant content is flagged as such is an issue.

HDR10+ Blu-rays are on the way, although not until the end of the year. Still, support for standard HDR10 and HLG means the major HDR bases are already covered.

MORE: HDR10+ – everything you need to know

While not as dramatic as the picture upgrades, sound has been improved on the Q9FN.

The Optimised mode is our favourite – big, weighty and spacious by flatscreen standards, it’s surprisingly capable when it comes to big-budget, action-packed films and TV shows.

The way it projects voices clearly means it works with the majority of content you watch on screen. But while the delivery is good for a TV, it’s still not up there with a capable soundbar.

We’d recommend you budget for at least one of those, if not a full surround system.

The Q9FN is undeniably a huge step forward for Samsung’s QLEDs, and a TV that will, for some people, be an even better option than the OLED equivalent.

There’s the extra brightness and colour vibrancy, of course, but also greater black depth and consistency than a backlit telly has achieved before. The surprisingly impressive sound and gaming features will also be a big draw.

On the other hand, those OLEDs will go even blacker, and backlight issues are non-existent. The LG OLED55C8PLA is just a little more consistent and natural across all sources, too.

Ultimately, that's just enough for us to lean towards the LG, but if you're drawn by the brighter-than-bright charms of the Samsung Q9FN or find it a bit cheaper than the LG C8, it's the one to get.

See all our Samsung TV reviews