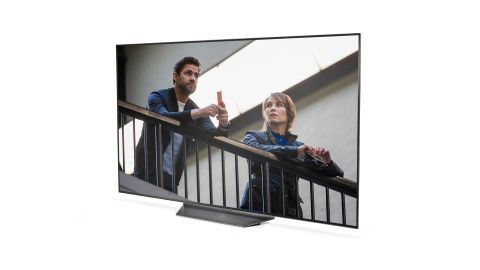 With a full and colourful picture, you won't find a better big-screen OLED at this price

The LG B9 is a mixture of the old and the new – combining last year’s processor with the 2019 TV panel. This makes it the most affordable model in LG’s 2019 OLED range and a tempting proposition indeed.

Here we’re reviewing the 65in model, the LG OLED65B9PUA, which undercuts the equivalent LG C9 by a healthy amount. But the question is: does placing the smarts from 2018 in 2019’s body and screen result in a perfect performance-per-pound proposition? Or is this something of a Frankenstein’s OLED TV?

Like the majority of LG’s 2019 OLEDs, the 65in LG OLED65B9PLA has a tidy design. From the front, it’s virtually all screen with a miniscule frame and a small, central, black plastic plinth taking the weight of the set. Just four screws anchor the panel to the stand but it feels sturdy enough.

The majority of the ports are around the back, with no big surprises here in terms of connections. Fully-certified HDMI 2.1 sockets bring with them a degree of future-proofing and there are more than enough sockets to accommodate any device you might care to attach. Positioning of the ports should pose no problem for wall mounting either.

The only other piece of kit included is the LG Magic Remote, a gesture controller with plenty of buttons on board. We’re not entirely convinced by the on-screen pointer, which often feels like it’s slowing things down, but there are usually hard button alternatives available. There’s also an LG remote app if you’d rather use your smartphone instead.

The Magic Remote also contains a microphone for voice commands, backed up by the Google Assistant service. Though it seems to recognise our commands, it doesn’t always deliver the best results unless you already happen to be in the correct section of the TVs operating system. Our request for the Jack Ryan TV show drops us into an action/thriller section on Netflix, for example.

WebOS is still the smart TV platform of choice on the LG OLED65B9PLA, and it’s pretty good. It doesn’t quite match the Tizen OS you get on Samsung TVs but it is graphically appealing and strong on usability.

It is easy to cycle through the main picture, the inputs and the sound settings, and the apps are all quick to find. Signing into our various accounts and services is as painless as these things get, and webOS is quick to detect and recognise our various devices. App-wise, webOS almost has a full house – the Apple TV app is the most notable absence, although that will be added imminently via a software update.

This 4K TV will upscale any lower quality video you care to feed into it. Inside you’ll find the LG α7 Gen 2 Intelligent Processor which is the processor for 2018’s LG flagship OLEDs, although this set can still perform LG’s AI picture and sound functions, which intelligently adapt performance. As for HDR, this TV supports Dolby Vision, HDR10 and HLG. There’s no HDR10+, but right now, that’s no huge loss.

We start with Justice League in 4K to see how the B9 handles Dolby Vision. Zack Snyder’s superhero film is grainy and strong on contrast, with colours rolled off in the more naturalistic scenes – and that’s exactly what this set delivers.

In the sequence where Bruce Wayne recruits Aquaman from a remote Scandinavian fishing community, we get some sweeping, almost monochromatic wide shots that give a great sense of this set’s ability to handle HDR.

The sky is bright but cloudy, the mountains are a salt and pepper landscape of rocks from basalts to chalks, the fjord is a deep navy blue and Ben Affleck is a moving, near-black object across the landscape in his charcoal peacoat.

There’s much potential for the detail to disappear with this TV having to produce the right levels of brightness to capture it all, but it does well. There’s a good gritty texture to the mountains, the sea looks viscous and you can tell it’s near freezing.

The best OLEDs do a better job at the lighting extremes, though. The B9 manages to show us something of the thick wool fabric of Wayne’s overcoat and the shading of the arctic sky, but we have to push the settings to get them. We know we can get more from the top TVs, but those sets cost a decent chunk of change more. What we’re getting in dark and light performance on this set feels very much on the money and will not disappoint.

Once Wayne gets into the Nordic meeting house and we get some close-ups on the weathered faces of the fishermen, on the bearded Aquaman and on Wayne himself, there’s no lacking in resolution. Even in this large panel size, the skin and hair is brilliantly defined and the blacks are excellently deep.

Stepping down to 1080p resolution, this set continues to impress. Like many 2019 TVs, it scales brilliantly and watching Stoker on Blu-ray is a treat. A light touch with the B9’s picture settings is enough to minimise noise. What we’re pleased to see most of all, though, is that the colour production is every bit as good as what you’ll find on LG’s top TVs.

The blue of Matthew Goode’s shirt, the red of Nicola Kindan’s hair, Mia Wasikowska’s lilac top and her brown skirt all set on the backdrop of the teal walls of their period home – it’s all expertly balanced. The colours are inviting and without over-saturation.

Even down at SD levels, the colours hold relatively well. But as we watch Three Billboards Outside Ebbing, Missouri, the levels of detail break down, giving us a glimpse of how this set doesn’t quite match other TVs in the range for control of lighting. Frances McDormand’s face is a little too uniformly bright in the scene where the priest comes to visit. Nonetheless, it’s still watchable.

The LG OLED65B9PLA has a 2.2-channel speaker set-up with a healthy 40W of power. It boasts both Dolby Atmos and a virtual surround mode, and both of these certainly add the extra dimensions to the audio that they claim to.

Watching Steppenwolf’s attack on the Amazons in Justice League, there’s a definite sense of height as the New God supervillain leaps hundreds of metres to come crashing down on the fleeing warrior women on horseback. And in surround mode, their arrows whip left to right well beyond the plane of the TV panel before the titanic baddie flicks them away.

The trouble is that you have to pay for these modes in dynamics. The extra processing dampens the punch and that’s not a trade-off we’d recommend. The weight of the sound is decent, if not that tight; we feel the blows as they land. Detail is nicely picked out too. It’s easy to hear the twangs of the bowstrings against film’s soundtrack, but voices are a touch on the muffled side through the dialogue, and that adds to that sense of missing precision.

We really like the AI sound tuning that this TV can perform. You use the Magic Remote to listen to the TV’s test signal and the set will automatically calibrate its speakers to best match the acoustics of your room. It definitely makes a difference even if it doesn’t turn this TV into a sonic world-beater.

If you really want a TV with stellar sound, then you’ll need something with a built-in soundbar or, better still, invest in some external home cinema sound.

LG has priced this big-screen OLED competitively and it doesn’t disappoint for performance. Its picture is natural, colourful and well-measured for contrast whether you’re watching in 4K or upscaling from HD, and whatever processor power is missing certainly won't ruin your TV experience.

There are small discrepancies in light and dark detail that 2019’s top LG processor could bring and it’s worth paying the extra for them if you can. As far as this price proposition goes, though, the LG OLED65B9PLA gets our full vote of confidence.