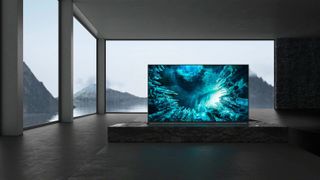 All the sets in the 2020 range feature Sony's new Ambient Optimization technology, which is designed to automatically control the picture brightness and sound output according to the conditions of the room. They're all AirPlay 2-enabled, too, so that you can stream direct from iPhones and iPads, and Sony has stuck with Android TV for the operating system.

Sony has also stuck with both Netflix Calibrated Mode and IMAX Enhanced certifications, which promise authenticity with Netflix and IMAX content respectively.

There's no place anywhere in the line-up for HDR10+ but Dolby Vision is, of course, supported throughout.

As for look and feel, Immersive Edge is the name of the Sony 2020 TV design concept. Core to the aesthetic is a hidden stand located at the edge of the screen for an unobstructed viewing experience.

Let's take a look at each of the TV series individually, starting with the top of the line and heading down to the more affordable options.

At the top of the 2020 TV tree is the Sony ZH8 LCD model. It's 8K viewing but at a more affordable price than the Master Series ZG9 models of 2019 (which continue for the time being). The panel sizes are also a little more manageable and come with a pair of two-position feet to make the ZH8 as furniture-friendly as possible.

As well as 8K, the ZH8 offers 4K 120fps compatibility for gaming. There's a backlit, aluminium remote control for low light viewing, too.

Sound-wise, there's Sony's frame tweeter, which turns the TV's aluminium frame into a drive unit thanks to actuators built into the set. That allows the audio to come straight at you from the front of the TV.

The big headline for Sony's 2020 OLEDs is that they come with Sony's class-leading X-Motion Clarity motion processing technology for the very first time. That should make for some of the smoothest OLED motion anywhere.

Like the ZH8, the 55in and 65in Sony A8 4K OLED TVs are powered by Sony's Picture Processor X1 Ultimate. The onboard 4K image database aims to help out with HDR production and upscaling by detecting and analysing individual objects and adjusting the contrast, detail and colour to make the most lifelike scenes possible.

As with the 2019 OLEDs, there's also Sony's Pixel Contrast Booster, to bring more colour and contrast to bright parts of the picture.

Sony's Acoustic Surface Audio tech has kept its place too. Actuators vibrate the whole screen, turning the panel itself into a viewer-facing speaker. It's also hoped to bring a better connection between picture and sound.

The A85 OLEDs are the same as the A8 but with slightly different feet.

The Sony A9 OLED is the company's very best OLED picture performance but in a small and manageable form factor. It's only available in one size - a very reasonable 49in model.

The panel sits on a small, central, aluminium stand and is aimed at those with more diminutive spaces who still want a premium experience. As with the A8 OLEDs, that experience includes Sony's class-leading X-Motion Clarity motion processing technology and high-end processor.

Likewise, actuators turn the whole panel into the TV's speaker with the aim to create a more immersive audio experience, as per the Sony Acoustic Surface Audio brand.

The Sony XH95 series is the top of the tree for Sony's 4K LED TVs for 2020. It features the same picture processing headlines as the sets above and a full-array LED panel with as many local dimming zones as Sony has to offer.

Sony's X-Wide Angle tech should ensure colours stay strong at all viewing angles but do note that it's not available for the 49in model, which also misses out on a few of the larger models' other features.

The most significant of these is the improved Acoustic Multi-Audio, Sound-from-Picture audio design concept. That consists of a bi-amp system, which controls the main speaker and invisible tweeter separately. Plus there's the size-optimised X-Balanced Speaker that fits into the underside of the slim design.

That slim, bezel-less design is called 'Flush Surface' although, again, it's not available with the 49in model.

The Sony XH90 TV range loses the 49in size and drops down to the lower spec 4K HDR Processor X1. These are still full-array LED backlight sets with local dimming and  Acoustic Multi-Audio is supplied by the rear-positioned tweeters and X-Balanced Speakers on the underside of the frame.

The design is no longer quite bezel-less but the frame is diamond cut for a slim look and the TVs are perched atop a pair of dual-position, V-shaped, metal blade feet.

The XH90 range will also be 4K 120fps compatible via a future software update.

The TVs below the XH90 do without local dimming. If that kind of subtlety of contrast is what you're after, you'd better look higher up this list.

There are other direct-lit models further down but the Sony XH85 series is edge-lit only.

The XH81 series offers a broader and bigger range of panel size options compared to the XH85. The small ones are edge-lit LED panels while the larger sizes are direct-lit.

Again, it has ice skate-style metal blade stands and a hairline finish bezel along with a matching aluminium remote control.

You also get the benefits of Sony's X-Balanced Speaker so long as you opt for the 55in model or above.

The differences between the XH80 and XH81 TVs are largely cosmetic. The XH80 comes with V-shaped Slim Blade feet rather than the arguable more stylish ice skate-style variety. There's also a far bigger range of sizes which, again, begin as edge-lit LED models, without the X-Balanced Speaker, up until the 55in version.

The price differences between the two series are, consequently, very small.

And then at the bottom of the pile are the Sony X70 4K TVs. There's a good array of sizes on offer but none come with the 4K HDR Processor X1 or the Object-based HDR remaster technology that goes with it. There's also no Dolby Vision support but the basic HDR standards are present.

We lose the X-Balanced Speaker option here, too, dropping down to the Bass Reflex Speaker. This is boosted by Sony's ClearAudio+ and S-Force surround sound simulation technologies.

Motion processing is not quite as advanced either. The Motion Flow operational frequency drops down to 200Hz instead of 400Hz. There are also just three HDMI sockets to play with instead of four.

The X70 series has the same Slim Blade stands as the XH80 but there's no Android TV OS. Instead it's a system based on Linux. Along with that, there's no AirPlay or voice assistant support either.

Again, the smaller models are edge-lit LED and the larger ones direct-lit.