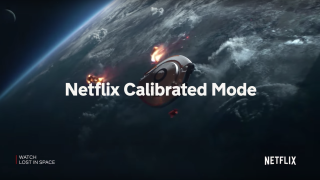 We’re obsessed with watching and listening to content in the way the creator intended. In fact, we pretty much see that as the whole point of home cinema and hi-fi. That’s why any new feature that purports to deliver greater authenticity is so appealing.

But what’s really involved? Is Netflix Calibrated Mode as good as it sounds? And what TV do you need?

How does Netflix Calibrated Mode work?

Simply put, Netflix Calibrated Mode is a picture preset that’s made available when you open Netflix on one of a select number of Sony or Panasonic TVs.

In fact, the explanation doesn’t really get much more complicated than that. When we first heard about Netflix Calibrated Mode (it was announced in July 2018), we assumed it would be a responsive feature that would use metadata to tweak settings depending on the specific content being viewed, but that isn’t the case. Instead, this is simply a blanket selection of picture settings that Netflix says gets the best out of all of its content.

Is Netflix Calibrated Mode any good?

We doubt very much that all of Netflix’s content creators have created their TV shows and movies using the same TVs and picture settings, and the differences in the visual approaches of Netflix Originals are stark. Do the visually subdued Mindhunter and brightly coloured animation Final Space both look their best with the same picture settings? We’re not entirely convinced.

Of course, however unlikely it may seem, it is possible that Netflix insists its creators use specific TVs with specific picture settings when mastering their content, but having used Netflix Calibrated Mode we’re struggling to see any significant differences between it and the sort of ‘Cinema’ preset so common across TVs from all brands.

Like a Cinema mode, Netflix Calibrated Mode seems to involve turning off most picture processing features and switching colour temperature to one of the warmer settings, and the result is an image that’s too soft and sepia-tinged for our liking. If it does turn out that these picture settings really are being used by the content creators, we could be persuaded to use them, but we can’t help but suspect that Netflix Calibrated Mode is actually far less tailored to specific content than suggested.

You can at least tweak the specific settings in the Netflix Calibrated Mode, but doing so somewhat undermines the concept.

How can you get Netflix Calibrated Mode?

If you’re more convinced than we are and really want to give Netflix Calibrated Mode a try, you’re going to need a Sony or Panasonic TV. The mode launched with Sony’s first Master Series TVs, the ZF9 and AF9, and is also featured on the ZG9, AG9 and XG95 2019 models.

We understand that Panasonic’s announcement has come just as an exclusivity agreement between Netflix and Sony has come to an end, and there’s every chance that more manufacturers will announce support for Netflix Calibrated Mode in the very near future.