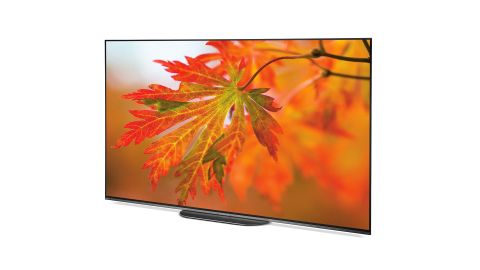 It doesn’t quite meet the expectations set by its price tag, but the A9G is still a very good TV, particularly in terms of sound quality

With all brands using the same LG-sourced panels for their OLED TVs, the question is how you differentiate yours from everyone else’s. With its striking designs, superior processing and ingenious screen-vibrating sound solution, it’s a question that Sony has been answering better than most.

The A9G is the latest in this long line of well-differentiated OLEDs. It looks more conventional than those before it, but still looks and sounds better than its rivals and benefits from some of Sony’s exclusive technologies.

It's also one of Sony’s Master Series models, which are designed to recreate the creative intent as faithfully as possible. Thanks to its presence in every stage of the film production process – many studios use the company’s BVM-X300 monitor when mastering their content – that’s something Sony is uniquely positioned to deliver.

Those are compelling arguments for the A9G, but does it justify being more expensive than its rivals, particularly LG’s own C9?

Beauty is in the eye of the beholder, of course, but the A9G is a gorgeous TV. The languid lean of the A9F (and A1 before it) has gone, but the easel-like design added rather a lot of weight and depth to the chassis. Without its stand, the A9G is less than half as deep as the A9F (4cm to 8.6cm) and 6kg lighter, making it far easier to wall-mount and even more impressive once it’s up there.

Those putting the TV on a piece of furniture will appreciate that the pedestal stand gives it a footprint of just 46 x 24cm. It also has a low profile, keeping the screen close to the tabletop upon which it’s placed.

The thin black bezels are indiscernible from the screen itself when it’s switched off, making the chassis completely invisible in an unlit room. Sony has put similar thought into the rear of the TV, with the flat back panel having a grid pattern that makes it a little more interesting than the norm and disguises the myriad detachable plastic panels that can be used to hide the connections and cables.

Those connections include four HDMI sockets that, while not officially certified as being HDMI 2.1-spec, do apparently meet the standard and will be certified in the future. You also get three USB sockets, optical and headphone outputs and simple, clip-style speaker terminals so that the TV can be used as a centre speaker.

Sony is sticking with Google’s Android TV as its operating system, which isn’t a bad decision given how much the OS has improved in the last couple of years. It still lacks the slickness, style and extra customisability of LG’s and Samsung’s bespoke alternatives, but it’s more intuitive than it was.

The app selection includes Netflix, Amazon Prime Video, Google Play Movies & TV, Hulu, HBO Now and Showtime Anytime, most in 4K and HDR (Dolby Vision, too, in some cases). Plex and VLC are on board for playing your own files, and Spotify and Tidal give you options for music streaming. The Apple TV app is missing, which is a shame.

In terms of format support, both IMAX Enhanced and Netflix Calibrated mode feature on the A9G, although neither is terribly exciting at this point. Of the broad HDR formats, Sony continues to support HDR10, HLG and Dolby Vision, but not HDR10+. The lack of HDR10+ is a bit of a shame considering there are now TVs available that support both Dolby Vision and HDR10+,  but it's not something you're likely to really miss in the short term.

Running the show is a version of Sony’s existing X1 Ultimate chip that’s been tweaked for use in the A9G and its Master Series sibling, the 8K Z9G. The X1 Ultimate brings with it a number of picture-enhancing features, including Object-Based Super Resolution and Object-Based HDR Remaster, which use a huge database of images and intelligent processing to boost the definition and contrast of specific objects in an image. The A9G also gets what Sony calls ‘Pixel Contrast Booster’, a panel controller that is said to maximise dynamic range and increase detail and texture.

That list of picture boosting technologies makes it surprising that the A9G looks decidedly dull when first fed an HDR film. It is possible to get a punchy picture out of it, but rather fiddly to do so. We settle on the Standard mode with Black Adjust switched off, Advanced Contrast Enhancer and Live Colour on high, Reality Creation, both noise reduction options and Smooth Gradation switched off, a few points added to Black Level and a few taken off Colour. The resulting picture is very nice overall.

We play the opening of Alien: Covenant, which sees the android David brought to life in the overwhelmingly white and mercilessly minimalist abode of his creator, Peter Weyland. The Sony’s recreation is striking in its solidity and subtle in its shading. The sharp rendering lends the few objects in the room, such as Weyland’s Carlo Bugatti Throne chair, a crisp, definite three-dimensionality against the bare flatness of the room itself. The Sony also has no trouble with the delicate shades that give the monochromatic room its gentle curve.

For all its faults as a film, the Alien: Covenant disc is packed with detail, and the Sony revels in digging up every last grain. You can see every wrinkle, pore and fabulous imperfection on Guy Pearce and Michael Fassbender’s faces. Both actors have a pale, greyish complexion here, but the Sony uses subtle shading to ensure that neither looks lifeless.

Switching to Guardians Of The Galaxy Vol. 2, the A9G recreates the 1970s Missouri of the opening scene in warm, sun-blushed style. It also proves that Sony is still the one to beat on motion processing. While the LG C9 and Samsung Q90R force you to choose between blur and unrealism, the A9G strikes an excellent balance that keeps motion sharp and smooth, without adding lots of shimmer or the soap opera effect.

But for all of its qualities, the Sony A9G doesn’t quite make the most of an HDR signal in the way its rivals do. The LG C9 is crisper and produces more pronounced highlights, particularly in overwhelmingly dark scenes, while the Samsung Q90 is brighter and punchier still. The Sony is simply less dynamic by comparison.

There’s also a feeling that the Sony is processing the picture on the fly. On occasion it adjusts, with a noticeable dimming or brightening of the panel. We suspect this is the Pixel Contrast Booster at work, but either way, it’s an issue. That’s partly because it makes some scenes dim, and partly because when you start noticing the processing at work, you’re being distracted from the film or TV show you’re trying to watch.

These flaws disappear when you switch from 4K HDR to Full HD SDR, though. In fact, the Sony A9G is one of the best performers we’ve seen with this quality of content. We play Looper on Blu-ray and are delighted by the punchy, bright and balanced delivery. The Sony does a great job of digging up real detail rather than falling into the trap of artificial enhancement, and blacks are notable for their depth, which ensures the night-time Kansas cityscape is suitably dark and dramatic, and their insight, which ensures that every detail of Joe’s dimly lit, achingly cool apartment is revealed.

Drop down to 576p, and while the picture is inevitably less exceptional, it is as clean and controlled as that produced by an LG OLED, and a little more vibrant.

With the launch of its A1 OLED in 2017, Sony also launched its Acoustic Surface technology, which replaces traditional speaker drivers with actuators that imperceptibly vibrate the entire screen to make a sound. Last year’s A9F refined the concept, but with the A9G it really seems to have struck gold.

The A9F had what was essentially a 3.2 ‘speaker’ arrangement, but for the A9G the centre channel has been dropped. That might sound like a retrograde step, but Sony says that by switching from circular to ovular actuators it has created a wider, more dispersive soundstage with better stereo separation, all without compromising directness and clarity.

We proclaimed the AF9 to be the best-sounding TV we’d tested at the time, but the A9G is better. There is a good spread of sound, but also a directness that makes it sound as if Joseph Gordon-Levitt is speaking right at you in the narration of Looper. There’s also solidity and weight that rivals can’t match, and space for voices and effects to breathe and take shape.

Once again, Sony makes it possible for the TV to take the place of the centre speaker in a traditional surround package by including passive speaker terminals on the rear of the set. This option may tempt many people, but we’d advise sticking with a proper centre speaker if possible – even the best home cinema amp will struggle to compensate for the tonal and character differences between the A9G and the traditional speakers flanking it.

The A9G is the best in class in a number of respects. It looks and sounds better than the vast majority of rivals, and it has better motion. It’s a fabulous performer with 1080p, SDR content, too. But if you’re looking at spending this sort of money, you want the best TV for the best content. Currently, that is 4K HDR, and with this the Sony falls behind the LG C9 and Samsung Q90R.

At the same price as the LG, the balance of pros and cons would probably see the Sony awarded five stars. It's vastly more expensive, though, so really needs to be better across the board. It isn’t, and so the A9G has to settle for four stars, even though we are rather fond of it.