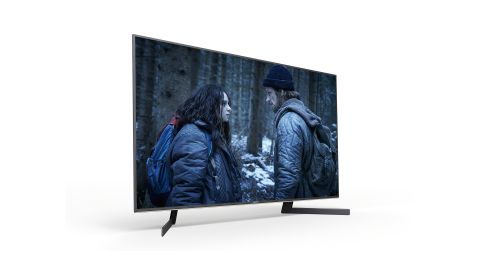 It may look familiar, but the X950H’s all new performance has set the 2020 benchmark for 49in TVs

In recent years, Sony has put more effort into delivering a high-end 49in set than most of its rivals, and has been rewarded with What Hi-Fi? Awards for the past three years running.

The XBR-49X950H is looking to make it four in a row by cramming in more of Sony’s top tech than has been seen before in a TV this size. There’s more pressure this year, though, with 2020 marking the debut of a 48in OLED. Can this Sony LCD still take the premium crown at this size?

If you’re looking for a bigger TV, the X950H series is also available in 55in, 65in, 75in and 85in versions. These larger models also come with a more advanced sound system, an X-Wide Angle panel that should improve viewing angles, and different feet that can be placed at the bottom corners of the set or closer to the centre for a smaller footprint.

Things get off to a slightly disappointing start when you remove the X950H from its box and discover that it looks more or less identical to last year’s XG9005 (which was sold in the UK but not the US). The feet are now near-black rather than silver, but the rest of the chassis appears the same. This is more or less last year’s TV with 2020 innards.

But does that really matter? It’s a shame Sony hasn’t taken the opportunity to slim the set down, as it measures a rather chunky 2.7in (the 49in Samsung Q80T that will likely be one of its closest competitors is 2.2in deep and the 48in LG CX OLED is just 1.8in). And those feet, while designed to accommodate a soundbar, still look a bit silly and give the TV a very wide footprint. Ultimately, though, this is a smart-looking set from the front, with the thin, brushed-metal bezel stylishly framing the onscreen action.

The remote has changed, with the X950H getting the zapper Sony launched with its premium sets last year. Not only is this a more ergonomic and better laid-out bit of kit, it boasts Bluetooth functionality so isn’t reliant on line-of-sight.

That change in remote control has also precipitated the single alteration to the set’s array of connections: the removal of the input for an IR blaster, which we would imagine few ever took advantage of. We’re left with a fairly typical connection selection that includes four HDMIs (one of which supports eARC), three USBs and an optical audio output.

While things might be familiar on the outside, it’s all change on the inside, with the X950H being lavished with Sony’s current top chip (at least until the inevitable new Master Series models are announced), the X1 Ultimate. This adds Object Based Super Resolution, which is designed to intelligently analyse and enhance the definition of individual objects in an image, and an enhanced version of Object Based HDR Remaster, which applies a similar approach to contrast.

The extra processing power also makes for a snappier user experience. Interacting with Android TV (the X950H launches with version 9, but will get an upgrade to 10 at a later date) is far more pleasant than before, with the set responding instantly to button presses.

Sony has also updated its own menu system, which sits alongside Android and is used to switch inputs, change settings and the like. These are much clearer and better looking than before, and Sony has even gone as far as including a picture and description for every picture setting, making it far simpler to understand what it is that you’re changing.

Android TV still isn’t as neat an operating system as the bespoke systems used by the likes of Samsung and LG, largely because interacting with it means going to a dedicated home screen while those rivals overlay whatever it is you’re currently watching, but it is fairly easy to use and gives you access to lots of apps.

Netflix, Amazon Prime Video, and Disney+ are all on board to scratch that 4K Dolby Vision streaming itch; Google Play Movies & TV deliver pay-as-you-go 4K content with HDR10; and Sony has been sure to make Hulu, HBO Now and Showtime Anytime available to US buyers.

It’s a shame that the Apple TV app is missing. You can use AirPlay 2 to stream Apple TV content from an iOS device to the X950H, but doing so sacrifices picture quality somewhat.

As well as supporting the Dolby Vision, HDR10 and HLG high dynamic range formats, Sony also supports IMAX Enhanced and Netflix Calibrated. We wouldn’t get too excited about these, though, as the former is currently a long way from widely available and the latter results in the dullest of dull pictures.

View Dolby Vision content using the default Dolby Vision Bright preset, and the experience is anything but dull. Watching The Witcher, it’s remarkable how much punchier and more vibrant the delivery is from the X950H than the XG9005.

Put aside what this says about Dolby Vision in general (how can both performances be what the creator intended when they’re fundamentally different?) and marvel at the enticing and cinematic performance that boasts a rich but balanced color palette, oodles of detail and excellent edge definition.

Motion is excellent here, too. There’s just a hint of shimmer as the camera pans down the fantastical tree in Stregobor’s conjured courtyard, but Sony continues its long-running form for motion processing that smooths and sharpens movement without sacrificing any cinematic quality. This is true of everything we watch during testing and we don’t feel the need to deviate from the default Motionflow settings.

We switch from streamed Dolby Vision to disc-based HDR10 by spinning up the 4K Blu-ray of Star Wars: The Rise Of Skywalker and are a little surprised that the default Standard preset is in need of a fair bit of tweaking, which wasn’t the case with last year’s XG9005. With the out of the box settings the image looks inauthentically vivid in terms of colors and a little dull in terms of brightness.

After many hours of tweaking and testing, we discover that the X950H doesn’t actually require a vast amount of adjustment in order to deliver the HDR image we’re after: simply drop Color to the early 40s (its default is 60), switch Live Color on and add a few points to Contrast.

Tweaked accordingly, the X950H puts in a lovely performance. It’s still just on the rich side of neutral in terms of its colors, but that makes for an enjoyably vibrant viewing experience that doesn’t veer into unrealness. Black depth is similar to that of the XG9005, which is to say not perfect, but the amount of dark detail is far superior and the way that bright highlights punch through the dark is superb.

Play the scene in which the film’s heroes encounter the giant worm, and Rey’s lightsaber pierces the gloom of the subterranean tunnels far more effectively on the X950H than the XG. Ditto BB-8’s blue torch and red LED. In other words, you can see more in dark scenes and they’re more exciting, too.

That said, the X950H’s local dimming still isn’t as sophisticated as that of top end backlit sets from Samsung, and that means you get a faint glow around bright objects on otherwise pitch black backgrounds. This is rarely noticeable during normal scenes, but you may encounter it during credits sequences. A little light creeps into the black bars at the top and bottom of a widescreen presentation, too.

That’s largely expected of an LCD set with an LED backlight and the Sony is far better than most, but our sample does also exhibit a bit of bloom around the bottom-right corner of the screen. It doesn’t really impact the viewing experience, but it is something we would expect a bought set to not suffer from.

Switching from 4K HDR to 1080p SDR (standard dynamic range) we notice that the adjustments made to the Standard preset for HDR have carried over to SDR. Most manufacturers have different versions of each preset, and Sony’s choice makes life a little trickier because SDR films and TV shows don’t look great with our HDR settings.

The solution is to use a different preset for SDR, so we copy the default settings from Standard to Custom and tweak from there, switching off Black Adjust and the Advanced Contrast Enhancer, and setting X-tended Dynamic Range and Live Color to Medium. You also need to switch the Light Sensor off for SDR viewing.

We watch Aliens and The Duchess on 1080p Blu-ray and John Wick 3 streamed via Netflix, and are delighted by the X950H’s performance, which is warm but natural in terms of colors, packed with detail and crisply rendered. Dark detail is excellent once more.

Drop down to standard-def via the YouView tuner and the image is clean and controlled enough, given the low quality of the incoming signal.

Gamers will be pleased to hear that input lag has been significantly improved this year. We measured last year’s XG9005 at 41.5ms, while the X950H is down to 21.1ms. That’s still not as fast as the latest Samsung and LG sets, but good enough to be virtually imperceptible. The set’s vibrant balance lends itself well to computer graphics, too.

Whatever you’re watching (or playing) viewing angles are decent but not perfect, with colors and blacks fading a little as you move off axis. The bigger X950H models get Sony’s X-Wide Angle tech, which should improve things in this regard.

While the X950H’s audio system has the same power rating as its predecessor’s, sound quality has taken a big step forward. In terms of technology, there’s now support for Dolby Atmos as well as acoustic calibration for your room that uses the microphone in the remote to analyse test sounds sent from the display and adjusts accordingly.

Even without room calibration enabled, this is a significantly weightier and punchier delivery than was offered by the XG9005, but turning it on opens things up even further and smooths out the occasional hard edge. Combine that with a suitable Dolby Atmos soundtrack, such as that of Blade Runner 2049, and it’s a surprisingly cinematic performance for a TV this size.

Even with standard Dolby Digital, there’s an openness and dynamism that’s rare for this end of the market, and stereo signals such as that from the TV tuner are clear and well projected.

Of course, a TV with downward-firing speakers is always going to have its limits, and adding a soundbar would be well worth the extra expense, but for a 49in flatscreen, this Sony sounds very good indeed. The larger X950H models get Sony’s Acoustic Multi Audio technology, so they should sound even better.

It may look the same as last year’s model (which never actually made it to the US), but the XBR-49X950H features a number of upgrades that make it a better TV than the Award-winning XG9005 it replaces.

The picture isn’t vastly better, but the increased brightness, richer colors and better dark detail combine to make it a more enticing and insightful performer. Add significantly enhanced sound and a snappier user experience, and this is an all-round cracker.

We’re yet to see LG’s 48in OLED and the 2020 edition of Samsung’s 49in QLED, but both are priced higher than this Sony and will really have to impress us to justify the extra expense.