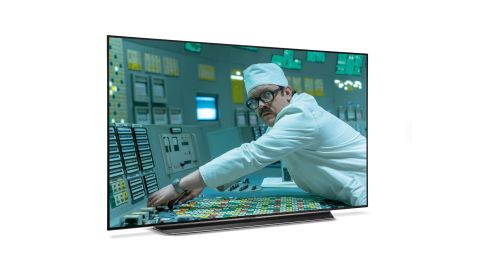 With its incredible colours, intense blacks and razor-thin panel, this is just another in a long line of totally brilliant OLEDs from LG

The LG OLED55C9PLA is a smaller version of a fantastic LG C-Class OLED TV that we’ve already reviewed. But size can be tricky. There’s little difference between a 1kg bar of Dairy Milk chocolate and a 200g one, except more chocolate – the flavour and the quality is just the same.

But just because the bigger panelled 65in LG OLED65C9PLA has a five-star rating, it doesn’t necessarily follow that the smaller version will deliver too. It should be the same, and often is, but that’s not always the case. So, can you spend £1000 less, for 10 fewer inches of screen size and still get a decent picture?

The LG OLED55C9PLA is a great looking TV with a bezel that’s only a few millimetres thick. Around half the height of the television is just razor thin panel. It’s only the lower section containing the 40W speaker array and the brains of the set that broadens to 4.7cm in profile before it meets the attractive brushed metal stand.

The gesture remote is standard LG fare – effective, weighty and with handy shortcuts to both Netflix and Prime Video. Around the back of the set, you’ll find all the ports, which include four HDMIs, three USBs and an optical audio output.

Once powered up, we find the TV replete with LG’s trusty webOS. It’s not our favourite TV system, but it’s up there with the best. The gesture control is handy and the interface is well laid out, clear and furnished with almost all of the most important apps, including BBC iPlayer, Amazon Video, Netflix, Now TV, Rakuten, Google Play Movies – many of which have 4K and HDR support. The only major absence is the excellent Apple TV app, which is now available on Samsung TVs and via a few standalone video streamers.

The menu can be confusing when you’re trying to locate all the picture settings, but given that only a few tweaks are required to get the most out of the TV, it’s not a huge issue. There’s also an Alexa app you can install to voice control the TV, with no additional Echo device required. Google Assistant is on board, too. HDR is taken care of by Dolby Vision, HDR10 and HLG, but there's no support for HDR10+.

Pitch, midnight and eclipse are just some words to describe the depth of the OLED blacks that this TV produces. We pop X-Men into the 4K player and even the blank screens before the idents are impressive. Devoid of backlight illumination, it’s like staring into an abyss rather than a halo of grey fuzz.

Sure enough, throughout the early scenes of the film, blacks stay inky. In the North Alberta bar where Rogue meets Wolverine, there are plenty of shadows to enjoy. There’s a sense that the finest dark details are a little lost to the blackness – the textures and folds of Rogue’s cloak are less defined here than on Samsung’s best QLEDs – but there’s no denying the drama and dynamism.

Arguably, this set performs better for colour, though. As we reach the helicopter scene with Senator Kelly and Mystique, we get an example of not just the vibrancy but also how naturally colour production can be done.

Mystique’s skin is intensely indigo, but even the navy of the secret serviceman’s suit jacket is impressive by how real that colour looks. The agent’s tie is a subtle light yellow. You can still see the pale blonde in the senator’s hair where it hasn’t all turned to white. His skin tone is a healthy peach and the senator’s tie a deep burgundy. It’s a rich delivery, but one that you immediately accept as being correct.

We switch to Blue Planet 2 and while the colours really zing, it’s the detail that grabs us from the off. As the camera pans over Earth’s landscapes, the planet’s snow capped mountains are a wonder of whites. The shaded differences between the peaks and the passes are beautifully rendered, providing an excellent sense of depth to the image.

The browns of the craggy cliffs are exquisitely detailed. In the sky, the clouds show off the full HDR contrast abilities of this TV. Instead of the more generalised whites some may produce, there’s a full palette of greys and creams giving definition to each and every one.

A few scenes later, the incredible BBC nature programme colours appear. The emerald blue of the coastal waters of Escudo island, just off Cuba, are sublime next to the dark navy of the deeper sea. The lush trees of the island are like skimming the surface of a tropical head of broccoli.

There is some judder with the motion processing turned down to minimum, but switching it up results in smoothing that’s a bit too sickly. You have to pick a compromise, as you do with most TVs that aren't made by Sony.

As David Attenborough explains the courting habits of a pygmy three-toed sloth, it’s the sloth’s hairs that impress us. Like waxed bristles, each one is detailed and textured, giving a feeling of just how coarse they are.

We take things down to Full HD with Guardians Of The Galaxy to see how this LG α9 processor copes with filling in the pixels. Whether creating the details for the Ravager uniforms or the blue make-up skin tones of Yondu’s face, this TV set is fantastic at upscaling, getting it right every time even during scenes of significant motion. Apart from the odd moving edge or fuzzy background detail, you could almost mistake the footage for native 4K.

But that falls down when it comes to watching Die Hard 2 in SD. Edges become pixelated and you need the noise reduction filters up to max to keep the image smooth. The film is still watchable, if appropriately retro in appearance.

The scene in Guardians Of The Galaxy where we first meet the ‘adult’ Peter Quill offers a superb opportunity to hear what the LG’s speakers can do. When spending good money on a TV of this quality, we would always recommend buying some kind of external sound system, but if that’s not possible, LG hasn’t left you high and dry.

The internal speakers do some good spatial work, offering a good spread of sound as Quill splashes around the planet of Morag. It doesn’t project the sound forward to the viewer particularly well – everything stays rather in the same vertical plane as the TV screen – but there’s a feeling of movement as the geysers blast columns of water around Quill. The bottom end notes don’t quite hit you in the chest, but your ears still feel it even if the rest of your body doesn’t.

Dynamically, the sound feels a little squashed. There’s not enough difference between quiet and loud sounds to clearly hear the individual drops of rain. The effect is a murky drizzle rather than the distinct shower we see on screen, but the system is intelligent enough with the LG AI Sound 5.1 Virtual Surround Sound switched on to create a convincing echo effect when Quill walks into the cave.

The midrange is where the LG performs best. The pips of Quill’s scanner, and particularly the whooshes as the laser bolts fly past his head, are the highlights.

The LG can be beaten for sound, and this C9 model seems a little less capable than its 65in counterpart in terms of audio, but as Quill dances round listening to Come And Get Your Love on his Sony Walkman with space rat in hand, it’s good enough for us to feel like the speakers are adding to our enjoyment of this great Marvel movie.

Picture wise, this TV is every bit as good as its excellent 65in sibling. Sure, the sound could be a touch better and a little more peak panel brightness might help with those dark details, but for this kind of money it’s a killer TV. Colours are insanely good, contrast levels are cracking, it’s super sharp and detailed. We’d have it at home in a heartbeat.