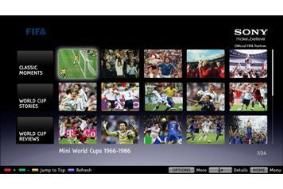 Owners of Bravia internet-enabled devices will be able to watch the Top 20 FIFA World Cup Moments, check out legendary FIFA World Cup stories and anecdotes, watch one of several World Cup films or check out their favourite classic football player via the web.

Christian Brown, senior category marketing manager for home entertainment, Sony UK, says: "Thanks to our partnership with FIFA, we can make some of the greatest football moments come to life in consumers' living rooms at the touch of a button."

Sony is global sponsor of the FIFA World Cup 2010 and is filming the matches in 3D.