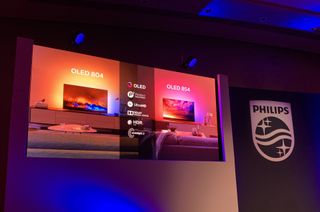 Both models get a new version of Philips’ own P5 Perfect Picture Engine, plus three-sided Ambilight, the new Android Pie (9) OS and, in a Philips first, Dolby Vision.

HDR10+ is confirmed as also being on board, as it was on the company's 2018 OLEDs, making Philips the second brand (after Panasonic) to announce a TV that supports both rival dynamic HDR formats. It completes the full HDR sweep with HLG and HDR10 compatibility, too.

In fact, Philips says that Dolby Vision, Dolby Atmos, HDR10+ and HLG and integration features across more than 90 per cent of its 2019 range.

The third-gen P5 processor is implemented in two-chip arrangement that retains the original P5's processing but also adds extra computational power to key parts of the chain. To that end, Philips claims improved noise reduction, sharpness and contrast from their 1000-nit displays, and from all sources and content - including the aforementioned HDR formats.

The B&W treatment has instead been given to Philips' also-just-announced premium 8804 LCD TV series.

Last but not least, the Google experience brought by the latest Android platform is bolstered by built-in Google Assistant. The TVs also support the ‘Works with Alexa’ programme, meaning they can be voice-controlled via Alexa through an Amazon Echo smart speaker.

As for the actual differences between the 804 and 854, we’ve little idea at this point. The two models clearly have different stands, with the OLED804 featuring a chrome frame and ultra-slim metal feet, while the OLED854 has a chrome frame and dark chrome swivel T-bar stand.

Needless to say, we don’t at this point have price info yet, but Philips did mention a vague first-half of 2019 launch.