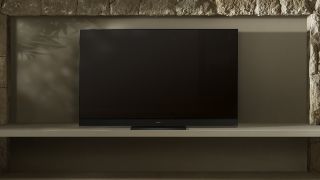 Panasonic has a brand new flagship OLED TV, the GZ2000, featuring HDR10+, Dolby Vision and integrated Dolby Atmos upward-firing speakers tuned by Technics. Promising to be "the world's most cinematic TV", it features a currently unrivalled level of support for the latest picture and sound technologies.

On show at this year's CES, the Panasonic GZ2000 for 2019 will look to build on the five-star success of Panasonic's previous generation OLED TVs, the FZ802 and FZ952, and aims to do so using wide thorough TV tech support.

Available in 55-inch and 65-inch models, it's the world's first TV to support both HDR10+ and Dolby Vision, the two variations on HDR picture technology. This means no matter the 4K disc or streaming content you watch, the TV will be in a position to optimise its performance.

This performance optimisation takes place on an OLED panel colour-tuned by Stefan Sonnenfeld, a respected Hollywood professional who uses Panasonic screens to as his reference monitors, alongside the work done by Panasonic's own R&D team. In particular, the screen is said to deliver a brighter picture with improved dynamics and contrast. And if you want to make your own mark, you can use the CalMAN PatternGen test patterns to calibrate your picture.

There's an upgraded processor, the HCX Pro Intelligent processor no less, which of course supports the dynamic metadata required for HDR10+ and Dolby Vision. It's also compatible with HLG, an HDR format favoured for live broadcasts, and used in the BBC's 4K iPlayer tests.

The GZ2000 doesn't neglect the sound, either. Another world first, you'll find upward-firing Dolby Atmos speakers tucked into the chassis of the TV set. Multiple speaker units aim to deliver something approaching the immersive surround sound we'd expect from Atmos, and the sound system has been tuned by the company's Technics audio brand.

Also new for 2019 is a new-look My Home Screen 4.0, a redesigned, customisable interface, with access to Amazon, Netflix, YouTube and live TV, as well as support for Amazon Alexa and Google Assistant voice control.

More details, including the price and release date are expected to follow, and we'll be getting hands-on first impressions of the new TV very soon.

Samsung announces 98in version of its 8K QLED TV