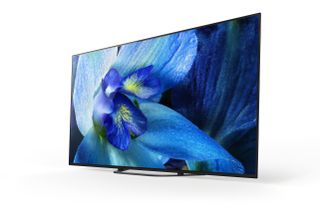 Hot on the heels of its new Master Series ZG9 and AG9 models, Sony has just announced details of its more affordable 2019 OLED offering, the AG8.

Available in 55in and 65in variants, the AG8 does without the X1 Ultimate processor of the AG9 OLED, instead sticking with the X1 Extreme chip seen on its predecessor, the AF8.

Once again, the sound system utilises Acoustic Surface technology, which involves actuators that vibrate the entire screen in order to produce audio, but if you want to add a soundbar, the AG8 can be raised to accommodate it by simply twisting it 180 degrees on its pedestal stand. That sounds like a neat little trick to us.

Like the new Master Series models, the AG8 is IMAX Enhanced-certified, which means it will be able to display IMAX-mastered content as intended. Whether that's something to get excited about (i.e. a genuine rival to Dolby Vision) remains to be seen.

Sony hasn't yet announced a release date or price for the AG8, but expect it to offer a useful discount on the AG9, much as the AF8 currently does on the AF9.