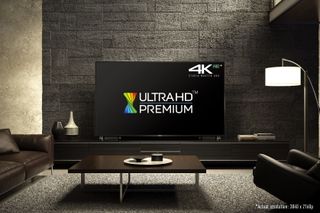 The company claims it's the first screen to meet the uber-stringent picture performance criteria set out by the Ultra High Definition Alliance, and consequently is the world's first 'Ultra HD Premium'-specification television. That said, the 'world's first UHD Premium TV' has also been claimed by both LG and Samsung today.

In essence, this means the DX900 has the resolution, image precision, colour gamut and high dynamic range performance to handle all of the new standards of picture format 2016 promises.

And fundamentally, it means the DX900 has the ability to combine extreme brightness with deep, detailed black-level response that's essential to make the most of the imminent High Dynamic Range content.

By using an innovative 'honeycomb' structure to control hundreds of rigorously isolated backlighting and local dimming zones, the DX900 is claimed to be able to produce high contrast whites and blacks in the same image with none of the 'halo' or 'bloom' effect commonly associated with LED/LCD TV technology. This should result in images far more dynamic and vibrant than we'd ordinarily associate with LED/LCD TVs.

In addition, the DX900 is a 4K, THX-certified screen with a smart new Firefox-powered operating system and a speaker array that includes four passive radiators in an effort to liberate meaningful bass from a slim, lightweight frame.

The DX900 goes on sale in the spring of 2016 and will initially be available in 58in and 65in screen sizes. Prices are yet to be confirmed.