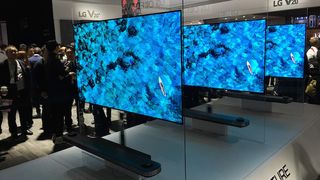 LG has been pushing hard with its OLED technology in 2017 - its W7 'wallpaper' television, G7, E7, C7 and B7 products have been generally well received - towards its ultimate goal of blowing Samsung's QLED technology out of the water.

And this year LG is investing KRW 2.8 trillion (the equivalent of around £200m, or five Manchester City players) into OLED technology, along with KRW 5 trillion into "plastic OLED" or POLED.

Alongside this KRW 7.8 trillion commitment, LG Display will invest a total of KRW 15 trillion (approximately £1bn) into OLED production lines through to 2020.

That's certainly a hefty sum. LG expects (or at least hopes) smartphone displays will shift to plastic OLED screens, intends to develop its OLED TV panels (which it currently sells to many rival manufacturers), and is developing flexible screens (most immediately for use in advertising).

That means the next LG phone could have a bendy display, as might your car - the company is looking to invest "in newly-growing markets such as auto displays, as well as smartphones, by unveiling various forms of flexible display products."

LG and Sony confirm no curved TVs for 2017