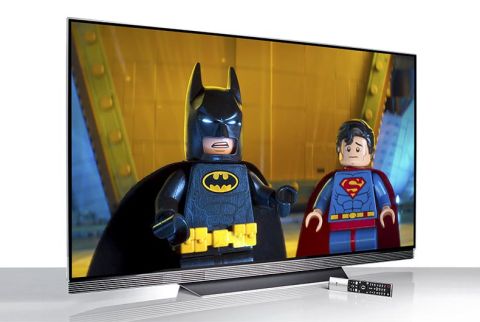 Whether this turns out to be the pick of the LG OLEDs remains to be seen, but it’s a stunner in its own right

This year is shaping up to be the most exciting year for TVs in a long time. Not just because The Crystal Maze is returning, but also because of the new sets you’ll be able to watch it on.

In 2017, there are going to be more OLEDs available than ever before, with Sony and others joining Panasonic and Philips in buying LG panels for its own models. At the same time, Samsung believes it has a serious challenger to the army of OLEDs with its new QLED range – and on early evidence it might be right.

MORE: Samsung 2017 TVs - everything you need to know

LG, the progenitor of the current OLED craze, is taking its own approach, with five models, each available in two sizes, all sharing panels, picture processing features and tech. The idea here is that you choose which LG OLED to buy based on its styling, speaker solution and, of course, price.

That makes reviewing the middle-of-the-range OLED65E7V a bit tricky. Not only is it the first TV of its size to hit our testing rooms this year, it’s also the first of the 2017 LG OLEDs to arrive, which means we can’t say for which one of the range will be the prime pick.

The case for taking a wait-and-see-approach is strong, but one thing we can say for sure right now is that this is an extremely impressive TV in its own right.

The current trend for TVs to automatically select the ‘best’ TV settings based on what you’re watching is one that dedicated tweakers might fret over, but the default settings are now often good and can make life significantly simpler for those without a Scout badge in picture calibration.

The E7 is pretty good out of the box, but we’d recommend switching from the pre-selected Eco picture mode to Standard, which is the mode to use for most of your normal viewing.

We also switch off the Energy Saving feature, which adjusts the brightness of the image depending on the ambient light of the room. With LG’s motion processing, some will prefer to switch it off, others might get some satisfaction altering the settings manually.

We get down to the nitty gritty by running our THX Optimization disc, but are soon aware we’re only making fine adjustments to what is already a superb image.

The only exception is when playing HDR10 or Dolby Vision content, at which point the LG defaults to Cinema Home mode. Generally this is a decent mode for HDR content, but it includes a warm preset.

Dolby might say this is the most authentic colour temperature, but it’s not to our taste. No problem; a quick hop into the White Balance menu and a switch from Warm 2 to Cool means that whenever Cinema Home mode is selected in the future it will be with our chosen, cooler palette.

One final note on the various picture modes: as well as Cinema Home there’s also a Cinema mode. Cinema is the more authentic of the two but can look too dim in a well-lit room.

Cinema Home has the same settings but with extra brightness for everyday at-home viewing, and is the default mode for HDR content. And yes, you will want to adjust the colour temperature for both modes individually.

With Netflix now having a decent selection of Dolby Vision content, we dive straight in. Marco Polo may not be classic television, but it’s cracking test material and the LG E7 does a terrific job with it.

The lantern scene in the first episode plays right into the hands of OLED, with its floating lights against a pitch black sky. Here, the E7 is clearly an improvement on last year’s sets thanks to a 25 per cent increase in peak brightness and an increase in bright detail.

Not only do the lanterns stand out more brightly than ever against the uniform blackness of the night sky, they also glow more naturally, with the white hot centre of the flame authentically giving way to warmer orange hues. The scene is a stunning demonstration of OLED’s strengths.

Praising an OLED TV for its black performance is nothing new, but it never ceases to impress, especially compared with LCD/LED rivals.

Each pixel emits its own light (without the need of a backlight), leading to striking images. It also makes the telly completely immune to any kind of clouding or backlight inconsistencies.

It’s less common to see reviewers getting excited about an OLED’s performance in brighter scenes, and it is true to say that even with the peak brightness increases that LG has introduced this year, the E7 is still not as bright as many LCD models, including last year’s excellent Samsung UE65KS9500.

The throne room scenes in Marco Polo provide another stern challenge as the darkened hall is bathed in light from the intricate windows behind the Khan. On the LG this sunlight is bright and punchy, but also natural looking and never overblown.

The Khan’s golden robes are similarly treated – some TVs make them look unrealistically bright, warm and glossy, whereas the LG makes them look striking, without venturing into the realms of the unnatural.

It is perhaps the OLED65E7V’s greatest strength that you always feel as though it’s delivering the image that the director intended.

You never get the sense that any part of the image is being tweaked or ‘enhanced’, which can be distracting. Instead you get what feels like a pure, untampered-with presentation, and it’s really rather glorious.

Detail levels are exemplary, even when switching to a 4K Blu-ray or dropping down to 1080p. Again, this feels like natural detail rather than over-enhancement.

Play The Revenant on Blu-ray and the faces of the frontiersmen are rendered in all their craggy, weather-worn glory, and the landscape is stunningly presented whether viewed up close in the forest scenes or enjoyed in one of the many beautiful vistas.

One of those vistas gives way to a slow pan as Tom Hardy walks through camp, and this is another stern test for a TV’s motion handling.

Even with LG’s motion processing turned off, what you get is a very natural, judder-free section with just a small amount of blurring. We think that’s preferable to the slightly unnatural, occasionally artefact-introducing processing.

The E7 also has a neutral and natural approach to colours. It does bright, punchy tones when it needs to, but feed it something more delicate that requires a subtle hand and it delivers with very carefully judged, realistic hues.

And if you’re watching standard definition TV, the image is surprisingly passable. For a TV this size and this focused on getting the best out of 4K, the clarity and control of the image is impressive.

As with all of LG’s 2017 smart TVs, the E7 is underpinned by the company’s webOS 3.5 operating system. As the .5 might suggest, this isn’t a huge change from last year’s version, but that’s no great issue given that it’s a clear and user-friendly system all-round.

Sources, smart services and features all exist as colourful cards that can be rearranged, added and deleted as you see fit, navigation is very snappy, and the TV supports just about every catch-up and on-demand service you need.

The remote control is excellent, too, combining the motion-sensing pointer skills of LG’s existing Magic Remotes with a full suite of buttons in a smart and ergonomically sound size and shape.

But nothing here, from the picture quality to webOS, is unique to this specific TV. LG claims that all of its other OLEDs should perform identically. What makes the E7 different to the B7, C7, G7 and W7 is its design and its sound.

This is a good looking set. The screen is surrounded by a thin black frame and the whole thing floats on a glass edge.

This section of the TV is only around 5mm thick, but the screen itself is effectively attached to a slimline soundbar that extends up the back of the TV and incorporates all of the connections.

That means the set isn’t universally super-slim, but the connections do have to go somewhere, and the E7 is still very striking in profile,

There’s something old fashioned about the look of the soundbar grille beneath the panel, but it produces a sound much more convincing than that of many flatscreen TVs.

This is a spacious, clear and solid sound by TV standards. Just don’t pay too much heed to the Dolby Atmos badge – it isn’t an alternative to a dedicated surround-sound set-up.

So if you’re looking to buy an LG OLED this year, should you buy the OLED65E7V? At the risk of sounding indecisive, it’s hard to say for sure.

Assuming that the picture quality really is the same across the entire range, we’d be inclined to suggest that the more affordable models, the B7 and C7, could be the better options – especially if you’re willing and able to add a separate speaker set-up.

However, for those who want a super-neat and stylish TV with sound built-in, there’s no denying that the E7 is a mighty fine option.

In fact, “mighty fine” is underselling it somewhat. This is a stunning TV, and while it’s too early to say whether it’s going to be winning one of our Awards later this year, we’ll be amazed if it’s not in the running.