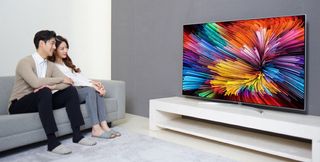 LG claims that its TVs can be viewed from wider angles than standard TVs, but we'll have a better idea of the effect once we go hands-on with the sets at CES 2017.

LG claims the technology delivers consistent colours no matter where you're sat in the lounge, which will be welcome news to anyone who's ever been kicked-out of the best seat in the house.

Nano Cell technology claims to enhance "the purity of the colours displayed on screen" by "absorbing surplus light wavelengths", which ultimately means colours might be more accurate.

MORE: Samsung may skip OLED to focus on QLED

So what else can these sets do? They support Active HDR and Dolby Vision, as well as the HDR10 and Hybrid Log Gamma HDR technologies. They're 4K, naturally, and run LG's webOS smart TV operating system. The flagship SJ9500 is just 6.9mm thick at its thinnest point, too.

There's no word on UK prices or release dates yet, we'll bring you more news when we get it.