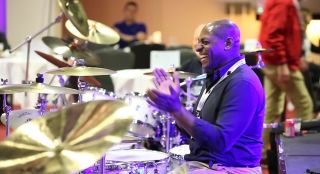 In 2016, the inaugural Indulgence Show - born out of the Headroom Show – saw the largest showcase of high-end hi-fi, home cinema and lifestyle in the Big Smoke in over a decade.

Last September the show returned to London's Novotel London West in Hammersmith, and while the month and venue remain unchanged for this year’s event, it will have a slightly different focus - one that’s well reflected in its new name.

Rebranded as 'Festival of Sound: the Music and Audio Show', it is still set to be a celebration of hi-fi, headphones and portable audio under one roof - most of the 150-plus exhibitors and brands that showcased last year, which include AKG, Arcam, Chord Electronics, Clearaudio, Dali, Dynaudio, Naim and KEF, are supposedly set to return. But in addition there will be a greater focus on music, with live musical acts (some renowned artists) ‘in abundance’, including a yet-to-be-announced VIP concert.

Exhibitors from musical instrument and other music-related sectors could also appear, and music-oriented seminars will return, with this year seeing world-renowned producers and recording engineers Chris Kimsey (producer of The Rolling Stones' Undercover), Gary Langan (who has worked with Queen, Yes and ABC) and Liam Nolan (a recording engineer behind Adele’s 25).

The Festival of Sound’s producer Vernon Hamblin said: “The first two years of our consumer show were naturally moving further and further into the realms of music in all its guises. Whether that was through the abundance of quality products and technologies on display enabling consumers to listen to music effectively at home or on the move. The vinyl fairs and musical instruments on to the live performances from individual artists and renowned bands. Therefore, to reflect this evolution and to reinforce the pervading musicality of the event it made sense to rebrand to The Festival of Sound, The Music and Audio Show. After all, it’s what we do best.”

12 of the best Bristol Show demos