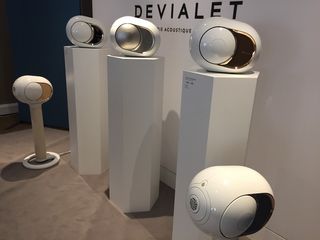 Visitors to Indulgence were treated to three shows in one, with the Headroom zone focusing on headphones and portable music players, while Audio London on the upper floors covered high-end hi-fi from the likes of including Arcam, Audiolab, B&W, Chord, Clearaudio, Devialet, Dynaudio, KEF, Naim, PMC and Quad.

And the Pure Pleasure zone was a patch of showfloor for a range of luxury goods including Tesla cars and fine wines, although in truth that part of the show was sparsely populated. Hopefully it will expand next year once the show gets a bit more established.

One of the most attention-grabbing exhibits were these German-made AER pnoe (yes, that is the correct spelling) horn speakers powered by Audiopax amplification and using an Origin Live turntable as the source. The speakers alone cost £65,000 a pair, so you'd better start saving (and that's assuming they would fit in your living room).

Rather more affordable is the new Uniti range of streaming products from Naim, being made in Salisbury, which we have written extensively about elsewhere.

This was the first public showing for the entire range, and Naim was demonstrating the £1600 Uniti Atom with a pair of high-end £7000 Focal speakers just to prove what the Atom is capable of.

KEF was much in evidence at the show. Not only did it have its recently launched Porsche-designed Space One wireless speaker and new in-ear/on-ear headphones on display, but also the just announced KEF LS50 wireless speakers.

And the legendary KEF Blade speakers were being used in the Devialet and Chord Electronics room, amongst others.

French luxury audio brand Devialet drew admiring glances from many for its futuristic Devialet Gold Phantom wireless speaker (shown at the top of this article), and had a cutaway model to show the inner workings including a new DAC which is capable of 24-bit/192kHz hi-res audio playback.

We were particularly taken with the Gpinto ON displayed by Auden Distribution. It's an unusual take on the 'music centre' concept, featuring a turntable with built-in amplification plus analogue, phono, optical and coaxial digital inputs and aptX Bluetooth streaming.

So you can connect a turntable, other analogue or digital sources or stream via Bluetooth from your portable device.

An extra £160 for a turntable cover seems a bit mean at those prices, mind, and you'll have to shell out an extra £100 for a Moving Cartridge module on the ON 100.

Old favourites were much in evidence at Indulgence, including the legendary Michell Gyrodec SE turntable. Even enclosed inside a Perspex box, it still looks magnificent.

And it was great to see Rega out in force with its much lauded turntable range, featuring the P1, P2 and P3.

Chord Electronics had one of the most impressive rooms, with the company's DAVE digital-to-analogue converter taking centre stage.

It's not exactly a snip at just shy of £8000, but it is very, very good indeed as we explained in our review. "If you're looking for the best DAC money can buy, the DAVE is a superb place to start," we said. Not sure about the name though.

Eagle-eyed readers will spot the KEF Blades being used again as part of the demo.

Elsewhere, there were high-end electronics on display from other British hi-fi stalwarts, including Leema Acoustics, Meridian and Musical Fidelity (above).

Down in the Headroom part of the show, headphones were (not surprisingly) much in evidence. Sennheiser was showing off its flagship Orpheus electrostatic headphones with partnering valve amp. Yours for around £35,000.

Back down on planet earth, Chord Electronics had a smart display for its Award-winning, £399 Mojo DAC and headphone amp, while there was plenty of interest on the Astell & Kern stand where you could listen to its latest range of hi-res portable players including the £500 AK70.

And just in case you weren't entirely sure which part of the show you were in, these were handily on display at the entrance.

One of the more unusual - and fascinating - exhibits was a whole gallery of black and white photographs of famous musicians by photographer-to-the-stars Ross Halfin.

He's taken pictures of rock royalty, including David Bowie, the Rolling Stones, The Who and many more. The show is worth a visit just to see those iconic images.

And to round off the day we came across Batman and Catwoman in the foyer, loitering next to a PMC banner. No, us neither.

Still, the Indulgence Show had an impressive array of high-end kit as well as more affordable items, so if you happen to be in London this weekend, it's well worth a visit.

And if you wander past the What Hi-Fi? stand, we have some great gifts on offer with our magazine subscription deals. Just ask for details at the desk.

To find out more about the Indulgence Show, including ticket prices, opening times and location, read our special show preview.